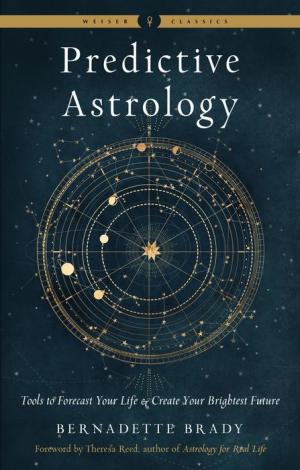 Bernadette Brady’s Predictive Astrology: Tools to Forecast Your Life & Create Your Brightest Future is a classic work that explores astrology in its most practical sense. Theresa Reed’s forward draws the reader in by recalling outstanding points from reading Bernadette Brady’s text, starting with the tale of the lark and the eagle.  The allegory of needing support and foundation (the eagle), and intuition (the lark and its song) to wield and understand astrology as a predictive tool is an underlying reminder for those who seek to learn how to use Brady’s text to its fullest.  Overall,  Brady’s introduction quickly confirms the need to put in the time and the effort to successfully use astrology as a predictive tool.

The frame of Brady’s work begins with the “Fable of the Eagle and the Lark”, followed by six detailed intensive sections on the various parts of what the curious reader will recognize as the most crucial constructs of astrology. By using a fable to encase the lessons in this book, Brady makes astrology more accessible, even as she delves in to the more detailed parts of transits, progressions, time maps, eclipses and older systems.

The role of the fable is meant to remind the reader that “astrology is based on science  and calculations, and  … unless you are prepared to “do your appreticeship”  and learn the basis of the craft, the doors that astrology can open remain closed. (xxii) Brady correctly points out through the fable and commentary that there is a balance between using the role calculations and the role of fate. While an event may be predicted, it is up to the individual’s will to choose the actual actions that will be taken.  In addition, Brady notes how the level that fate appears to play in an individual’s life affects the apparent success of predictive astrology (xxiii). In other words, if fate is everything, all the time, then the odds of something happening by chance are nearly nonexistent. Brady addresses the reverse, regarding the outcome if fate has no role in an individual’s life with her comment that “astrologers for the last 5,000 years have been barking up the wrong tree.” (xxiii)

The continued popularity of astrology and its success as a predictive tool leads many, including Brady, to conclude that there is a combination of the two.  In short, predictive astrology works because there is a certain level of fate that affects the average life. “Thus astrology can predict the timing and style fo the forthcoming events, but it is the human part - the part not show in a char - that chooses the exact expression of the event.” (xxiv)

Having established through the fable the ground rules for those wishing to learn more about predictive astrology, Brady presents a detailed and excellent outline as the first step, defining a model for the understanding of fate through the next section, “The Alphabet”.  In this section, planets, angles, planetary cycles, aspects, and houses are explored from the viewpoint of predictive astrology in great detail. What works well in this section is Brady’s presentation: her language and usage are clear. Planets are listed in order using key principles, zodiac movement, the time to travel through a typical chart, how it can be used in predictive astrology, and what figures are represented by a particular planetary body. Short transit descriptions are listed in combinations by planet, nodes, and the major points (ascendant, descendant, MC, IC), vertex and anti-vertex.

While there are many welcome surprises in this book, there are a few drawbacks in the first set of five chapters which comprise “The Alphabet”. First, the planetary cycles section, while good, was also brief in comparison with the two sections before (planets and angles)  and the two sections which follow (aspects and houses). Second, the houses section refers to transit grids which are not fully explained until the next major set of chapters that fall in the second major section, “Working with Transits”. While Brady does note that transit grids are discussed in detail later in the book,  I found the flow interrupted when reading the earlier chapter “Houses in Predictive Astrology” in the section called “The Alphabet”.

The second section, “Working with Transits” starts with a well-organized  and presentation of transit basics, case studies. It ends with a much needed chapter “Feedback on Failure” that uses well-known figures (Joan of Arc and Thomas Edison) to explore what happens when predictive astrology falls short. Brady lists three possible reasons for failure, and directs readers who have the fourth option (the technique just doesn’t work) to look at the sixth section, “Older Systems”.

The third section, “Secondary Progressions” follows the pattern of the transit section with a strong introduction to progressions overall, followed by non-chart and chart related progressions. The concluding chapter, “Interpreting Progressed Planets” works especially well with its usage of Galileo, da Vinci, and van Gogh’s information for exploring progressed planets and how they appear in the charts. Brady adds other well-known historical figures to demonstrate the timing of the progressed sun (Neil Armstrong and Martin Luther King Jr) before major events in their lives. (130)

The two most fascinating sections are the fourth on “Time Maps” and the fifth on “Eclipses and Soros Cycles”.  Brady’s work guides the reader through the connection between the elements of storytelling with the charts and maps of transits used with a client. The chapter concludes with an excellent set of directions on using Time Maps, with a reminder that they are like “photographs”.  I found the chapter on “Eclipses and Soros Cycles” to be fascinating with a look at eclipses in general and how the cycles might work in the future by looking at the chart of a sample client, followed by what to do if a client is born on an eclipse, like Prince William of Wales in 1982. Brady continues to caution in favor of balance with this aspect of predictive astrology with a reminder that this practice is never quite ‘cut and dried’.  It is Brady’s practical approach that makes this volume an excellent guide for those seeking to learn more regarding predictive astrology.

The final two sections, first on “Older Systems” and the final chapter which returns to the concept of the lark and eagle, are complemented by a series of eight good appendices which close the book.  By arrangement, Brady does not shy away from potential problems new predictive astrologers will encounter in examining charts. This work permits those interested in astrology on any level to explore and to commit to a fuller understanding of the tools of predictive astrology. As a minor point, while the appendices are good, the closing bibliography could have been a bit longer and updated as many of the texts are from the 1970s and 1980s. While these texts would have been current for its original 1992 edition, this updated text thirty years later needs a list resources that reflect recent developments in the field of astrology in general and predictive astrology in particular.

Overall, this is an excellent text. What I liked is the manner in which it engages the reader, starting with Reed’s forward that detailed her own introduction to astrology as a teenager,  and how she found Brady’s text, Predictive Astrology: The Eagle and the Lark as an informative link for her astrological studies.

What makes this book valuable is the acknowledgement that predictive astrology in its fullest form takes time, a solid foundation, and a clear understanding of the juxtaposition of fate, free will, and human interaction with both.  The journey through the various areas Brady lists in her book will help give the individual a start into many components which assist in utilizing predictive astrology to its fullest.

Predictive Astrology: Tools to Forecast Your Life & Create Your Brightest Future is a work that fits the needs of the beginner and the advanced astrologer by presenting itself as a primer and reference book. Brady has laid out a reasonable argument to consider looking at all aspects when considering the crafting of a detailed and correct predictive astrology chart.  This book would fit as supplementary reading for those seeking to learn more about a practical side of predictive astrology. Brady demonstrates how a correct approach to astrology can lead to good results. This work encourages exploration of a variety of aspects found in predictive astrology. It is a delightfully enjoyable and much needed work.