Drawing Down the Spirits: The Traditions and Techniques of Spirit Possession 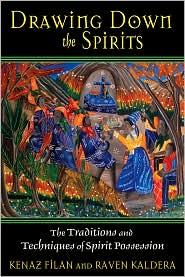 It’s seldom that I get a book for review that’s truly something new under the Sun. While I get lots of good stuff (and some real stinkers, too), most of the books are variations on preexisting topics that have already been written about to a significant extent. Not so this one. While there have been books in the neopagan genre that have touched on spiritual possession, as well as less intense practices such as aspecting and “drawing down”, full-on possession has largely been left to academic perusals of African diaspora and shamanic practices and belief systems. So getting to read an entire text dedicated to the actual practice of spirit possession was a definite treat, particularly as “spirit work” has become more prevalent in recent years.

The text starts with a good theoretical overview of possession work–what it is, where it came from, and what people have been saying about it. Then we get into some of the details that are useful in setting up the actual practice, such as a thorough discussion of cosmologies (after all, understanding “what” spirits and gods are and “where” they are as well goes a long way in having context for working with them). After that, there’s a wealth of information on things to keep in mind when doing your own possession work, to include the good, the bad, and the terrifying.

Do be aware that this book is heavily influenced by the authors’ biases, to the point that some parts could be interpreted as offensive to some readers. For example, they are very much hard polytheists, meaning that they believe that individual deities are just that–individuals, not parts of a single archetype. Those who see deities in a more archetypal form are referred to as “atheists” in this text, which could be potentially inflammatory in its interpretation of what that may mean to the individual archetypal pagan. The dedication to hard polytheism over all other theistic views is a constant theme in the book, and because it comes across as heavy-handed at times could be off-putting to some readers.

However, I say this as a caveat, because I want people to be prepared enough to be able to look beyond it if necessary so that this book can be appreciated for what I really want to say about it: If you have any interest in the practice of spirit possession, you want this book. I don’t do possession work myself, at least not to the extent discussed here, but I know people who do, and this meshes pretty well with what they’ve described of their own experiences. The authors most certainly know their audience–they’re familiar with neopagans who may be themselves unfamiliar with full possession work, and therefore much of the material is geared toward not only helping the individual practitioner do their work with a relative amount of safety, but also doing so in an environment where what they’re doing may be seriously misinterpreted. Also, while the book (thankfully!) isn’t full of prescribed, pre-crafted rituals, the appendix with the detailed ritual outline is a definitely valuable resource.

There’s not much more I can say at this moment without utilizing the material myself, and I do have to wonder how a better environment for full possession might affect the experiences not only for myself, but for other neopagans who have only done such things as aspecting. Will this book help create more opportunities for this sort of work? Only time will tell. Needless to say, this is one of the best resources I’ve read this year, and it’s definitely keeping a good spot on the bookshelf (or off it, as it’s needed).