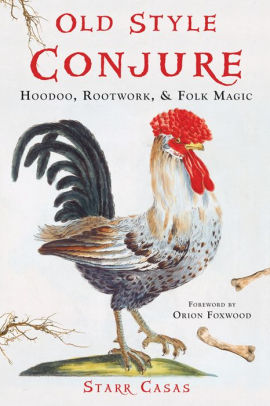 Conjure has gotten trendy lately. When a tradition gets trendy, all too often it gets diluted. Especially now, where magic is popularly perceived as “owned” by Pagan rather than Christians, and where this sense of ownership can encourage some practitioners to appropriate other magic out of context and call it eclectic. Mama Starr Casas sets the record straight about Conjure and Hoodoo and why it doesn’t need eclectic mixing. If you do mix and it works, great – but according to Casas, don’t call that Conjure.

For those still unfamiliar, Hoodoo and Conjure are traditions of folk magic developed by slaves and other disenfranchised people in the southern United States. Using the Bible as a grimoire and the native plants, minerals, and byproducts of daily living as magical tools, Conjure and Hoodoo workers address the problems of daily life in small communities. This magic draws money or love, reveals enemies, stops gossip, and corrects luck.  According to Casas, the Gullah people created this magical system as a way of preserving their own culture. Now the culture of Conjure is embedded in the south in myriad habits and practices both conscious and not.

Because Conjure has so many different aspects and areas of expertise, most books on one aspect at a time in pamphlet/miniature book form. One book might teach how to read with playing cards, another how to cast with bones, and yet another on different methods of love magic. Each aspect of these practices have a heavy cultural context not entirely visible to non-southern readers. Casas manages to pull all these disparate pieces together in one cohesive, comprehensive-feeling volume. Along with the lists of herbs, waters, and household tools common to Conjure books, Casas adds a level of depth with more than just history but with the logic behind the practice. She shares with readers how to make bones for casting, methods of improving egg cleansings, and several personal passages that make it clear no one will ever manage to record everything about Hoodoo and Conjure.

The best part of Old Style Conjure is Casas’ passages about the Ancestors. Casas is not speaking of personal ancestors (although it is part of the work) but the Ancestors of Hoodoo and Conjure. Harriet Tubman, Sojourner Truth, and Aunt Caroline Dye get just as much attention as Moses and Solomon – and her accounts of them, while factual, are also moving.

There is much to recommend in Casas’ book, for anyone interested in Conjure, Black history, and southern culture.