Becoming a Garment of Isis: A Nine-Stage Initiatory Path of Egyptian Spirituality 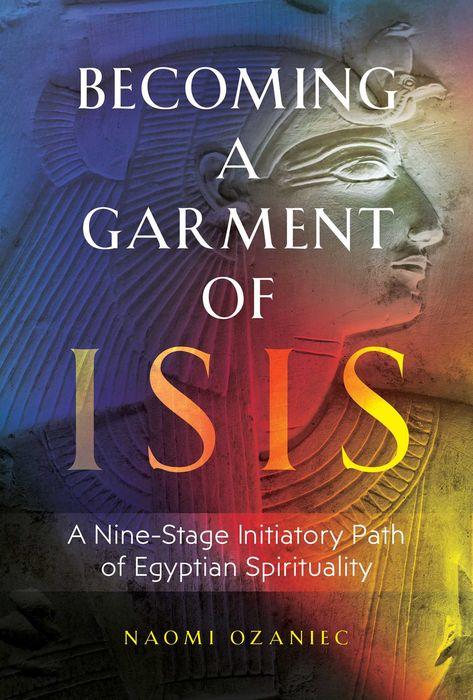 In her new book, Naomi Ozaniec elucidates the essentials of ancient Egyptian mysticism and offers templates for anyone who’s on a path seeking union with the Divine.

Naomi Ozaniec is a priestess of Isis (the Greek name for the Egyptian Goddess Aset), an author of many books about meditation and divination, and a practitioner of western esotericism since the 1970s.

The book is both academic and inspirational, full of scholarly references interwoven with the author’s experiential memories, and her instructions for visualized journeys. It’s not an easy book to read as the author is translating an ancient metaphysical mindset for us moderns who live with such different ways of thinking and knowing.

In her preface, Ozaniec details the false starts that preceded her finished book.  At first, she wanted to create a seminar series for women seeking service to Isis. But she tabled that project because she felt she was taking Isis out of “a broader metaphysical context.” Next, she tried to write about Isis within a wider temple tradition, but that didn’t work because ancient Egyptian spirituality was/is not a religion per se. It is a holistic world view, one not experienced as a series of linear events.

What finally came to Ozaniec, based on her long years of study and practice, was a set of nine processes, grouped by threes within three types of temenos, or sacred spaces.  (In Greek the word temenos meant a “temple enclosure.”) There is the first temenos of heartmind where “deep alchemical change is set in motion by the power of intelligence, inspiration and imagination.” The second temenos of the spiritmind involves dedication, meditation and transformation. The third temenos of the soulmind involves initiation, mediation and identification.

All of these terms are explained and presented as overlapping and mutually reinforcing stages. But this isn’t a how-to book, and it doesn’t even start with the nine stages Ozaniec eventually outlines. Instead, she begins with an overview of how the Kemetic (pertaining to ancient Egypt) mind-set differs fundamentally from our contemporary religions. It’s not even a religion at all, she emphasizes.

For the modern western mind, religion is often a matter of cultural identity. “To encounter the Kemetic mind-set,“ Ozaniec writes, “is to discover an entirely different perspective that places the personal into a cosmic framework.” For one thing, the sacred and the scientific were unified, not separate. “Kemetic Sacred Science is an initiatory schema not a faith; it is a gnosis, not a belief, it is a technology of consciousness, not a religion.” In Kemetic cosmology and practice, phenomena are viewed as occurring in a simultaneous flux. Supposed oppositions are reconciled within greater cycles such as day/night, light/dark, as sanctified pairs. As per the Hermetic axiom, “as above, so below,” everything is connected, and the human person is potentially “an embodiment of the divine.”

The path toward becoming a garment of Isis, i.e. an outward manifestation of the Goddess, is not something that happens as a discrete event or events. She writes: “Becoming a Garment of Isis describes a state of re-identified being, not a title or rank. It signifies a mystical relationship between the eternal and the mortal, a marriage between the personal and the transcendent. Ultimately, it signifies an embodied union of being.”  (p. 18)

After establishing that a Kemetic-inspired path is one of divine becoming (rather than doing) Ozaniec traces the stages.  As someone with little knowledge of Egyptian spirituality and much experience with other mystical paths, I found several of Ozaniec’s connective themes to be readily evocative.

One view and experience--which she says is crucial to internalizing a Kemetic mind-set--is that of continuous creation. Whereas the exoteric view of Christianity (and the other Abrahamic religions) is linear -- as with the idea from the first line of Genesis that “in the beginning, God created….”—a mystical view is that creation is always underway. Beginning and becoming are perpetual states in an eternal flow. (Here I am reminded of a Zen saying: no birth, no death, no coming, no going.)

A second theme that struck me throughout the book is the idea that mysticism is not a religion – as in, a regulator of behavior – so much as, her phrase: a technology of consciousness.

To illustrate what she means by technology, Ozaniec delves into the ancient mysteries, both from Egypt and at Eleusis in ancient Greece.  Ancient wisdom seekers traveled long and arduously to these places because of the knowledge they would find there, knowledge about life, death and mystical experiences, through explicitly participatory, dramatic renderings of cultures’ central myths. Egypt’s central myth was the betrayal and murder of Osiris and the search for him undertaken by Isis-Aset. A central Greek myth was the abduction of Kore and the search undertaken by her mother Demeter. Both mysteries, Ozaniec writes, “present the inescapable human experience of loss and grief, the search for understanding and the eventual realization of the soul’s eternal nature.”

Throughout the book, I appreciated Ozaniec’s presentation of Egyptian mysticism as something potentially cross-cultural and cross-temporal. She compares the path of becoming that she has experienced with paths now familiar to many westerners, for example, yoga, Sufism, and Tibetan Buddhism. These are all practices of embodiment.

Becoming a garment of Isis is not all that dissimilar to Tibetan concentration practices of embodying deities. The Dalai Lama himself is a representative figure, a man named Tenzin Gyatso, born of human parents, who is both an exiled political leader and, by tradition and practice, an incarnation of Avalokiteshvara, the Divine Being who embodies compassion and who hears the cries of the world.

In a final chapter, Ozaniec concludes that while ancient Egypt “may indeed be a dead civilization,… the primordial wisdom, the prisca theologia, is not dead; it is spread across the globe, hidden in those newer philosophies of Buddhism, Vedanta, Taoism, and Sufism, which likewise open to the inner way. This is the concordance of esoteric transmission.”

Becoming a Garment of Isis is a major contribution to the literature of the world’s perennial wisdom streams. It points the way, just as the Egyptian mystics did, to the endless path and the eternal nature of the soul.