Fourth Uncle in the Mountain: The Remarkable Legacy of a Buddhist Itinerant Doctor in Vietnam 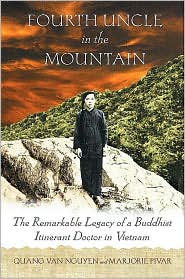 This is the amazing autobiography by Quang Van Nguyen (pronounced wang van wing). He was abandoned as an undernourished infant in the Cho Lach’s village market in the Mekong Delta of South Vietnam in 1950, during the Indochina War. A strange, older man named Thau Van Nguyen arrived in the village. Thau was a highly trained and respected “barefoot doctor” being hunted by the French colonial regime and, more or less, on the run. Still, the villagers pointed out that he needed a son so he could pass along his skills. Much as he’d gotten stuck with a wife he didn’t want, now he got a baby he didn’t much want.

Quang’s story is told as a series of loosely chronological incidents narrated in first person. He tells the readers about his life in simple phrases, giving descriptions of the people and locations, about general conditions as well as stories about things that happened to him. The tone is so intimate it makes the reader feels as if they’re in a room with a storyteller, and a very good one at that. Don’t mistake simplicity for a lack of depth, though, because this book will rock your world with its scope and power.

Western readers will simply have accept Quang’s story on Quang’s terms. It is totally worth it because it is indeed a remarkable life story. Quang was brought up as a Buddhist and started medical training early, studying with practicing professionals of herbalism and pulse diagnosis. The Indochina War raged through the region: bombs were dropping and the French were making life hell for the locals. After the French abandoned Vietnam, the Americans came and the misery continued for the people. Food was scarce and traveling wasn’t safe. Quang’s description of the gangster bus drivers is funny and horrific. Nevertheless, Thau took his adopted son around the Seven Mountains area to obtain a thorough education. When he was twenty-five, Quang became the abbot of a Buddhist temple.

Quang’s training included forbidden lessons in Cambodian sorcery and martial arts. He spent time with a 150-year old monk learning meditation on the Sacred Mountain. He befriended tigers and the mountain itself. The book contains much about the Vietnamese traditions about magic, spirits and ghosts. The sincerity of Quang’s narration simply doesn’t allow for frivolous fictionalization. Each reader will have to make his/her own decision if these incidents are just peasant superstitions or something more.

Our Western culture is saturated to bursting with self-promoting scammers parading as spiritual teachers – it’s all about the next book, the next lecture tour or workshop, the next CD or DVD. It’s easy to get jaded and disillusioned when religion, spirituality and even healing are tainted with the stench of mercenary motives. Quang’s story is something completely different. He tells the reader about a way of life and traditional medical practices and remedies that are almost lost to the world now. He gives a unique native account of living in a country torn apart by multiple invaders, something few Americans have experienced in spite of our tiresome national obsession with Vietnam. The selfless, unaffected narrative never indulges in hyperbole during descriptions of amazing magical incidents, nor does it magnify the bloody horrors of the Indochina or Vietnam Wars that ripped Vietnam to shreds along with its ancient and beautiful traditions.

Quang was able to escape Vietnam as one of the Boat People. After living in a refugee camp on the Philippines, he was granted asylum in the United States. He currently lives and practices his traditional forms of healing in Vermont.

Plan to read this book on your day off so you can follow where Quang leads. You won’t want to put it down. This book gets my most enthusiastic, very highest recommendation – simply superb.