The Best of Equinox Vol I: Enochian Magick 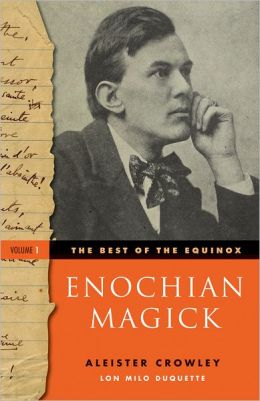 The introduction places the two great British magi in context with one another. Enochian magick was developed by Dr. John Dee and the scryer Edward Kelly from 1582 to 1589. Dee was an important adviser for Queen Elizabeth I. Dee's angelic manuscripts languished for three hundred years. S. L. MacGregor Mathers found Dee's diaries and organized the material into a magical system that was part of the HOGD curriculum. Aleister Crowley's interest surpassed the group's introduction to Enochian magick techniques. He explored the material in depth and had incredible experiences performing rituals with the invocations. Crowley's overview of Enochian basics and his visionary memoirs comprise the bulk of this volume.

Liber LXXXIV: Vel Chanokh is a summary of the seven-fold table and angelic talismans. It outlines the talismans, watchtowers, the Enochian alphabet, and provides a compendium of the Aethyrs, governors and servitors of the watchtowers. Eighteen calls to invoke the Aethyrs are provided in Enochian with English translations. This occupies 46 pages.

The next section is Liber XXX Aervm: Vel Saecvli, Being of the Angels of the 30 Aethyrs: The Vision and the Voice. Aleister Crowley recorded his preliminary encounters with the 30th and 29th Aethyrs in Mexico in November 1900. Several years passed. The full-blown Enochian thunderdance took place in various locations in Algeria during November and December 1909. From November 23 to December 20, 1909, Crowley performed twenty-eight invocations. The written records of his visionary angelic encounters are, well, mind-blowing. These encounters were shifting scenes of visionary landscapes, conversations with a polyglot of angels and deities from multiple pantheons, dragons, terrifying angels, clashing armies, rivers of blood, rosy crosses, occult and Kabalistic expostulations, and sequences with flashing tides of symbolic images.

The underlying order of Crowley's angelic encounters relates to the structure of the universe as diagrammed in the Kabalistic Tree of Life. He received introductions to members of the incorporeal hierarchy, occult lessons, tests and ordeals, initiations, and indoctrination into angelic mysteries. The experiences become even more intense as the Magus approached the final four Aethyrs. His note-taking ability deteriorated as the psychic displacement strained his body and mind. Words were insufficient. Matters climaxed around December 18th when Crowley attempted to invoke the 2nd Aethyr. It took four attempts to pass into this Aethyr's domain; the exchanges were somewhat garbled and incomprehensible. The final vision with the 1st Aethyr led him to Horus, the Lord of the new Aeon.

It gets spookier: there was a total lunar eclipse on November 27, and a solar eclipse near Crowley's Ascendant on December 12th. These difficult rituals must have been immensely taxing on physical, mental, emotional, and spiritual levels. The solar eclipse points to the complete sublimation of ego-mind-self and the total obliteration of his connection to reality and the earthly dimension. The final seven days make for harrowing reading. The rituals were completed by Winter Solstice.

One might suspect that descriptions of angelic encounters might make for very strange reading. Admittedly, some of it does read a bit like one of Timmy Leary's acid trip diaries. I found them wildly compelling, almost impossible to put down, and frankly much better reading than the Biblical Revelations. A lot of the phrases and buzzwords that appear in Crowley's later writings are probably drawn from these encounters.

This book is recommended for Crowley devotees, occult historians, and for those who would like a taste of what might happen if one performs the rituals and invocations.* Enochian magick is the first truly “modern” and original new magical system in the Western occultism. Dee and Kelly's oracular partnership and Crowley's ritual journeys are milestones in occult history.