The Complete Lenormand Oracle Handbook: Reading the Language and Symbols of the Cards 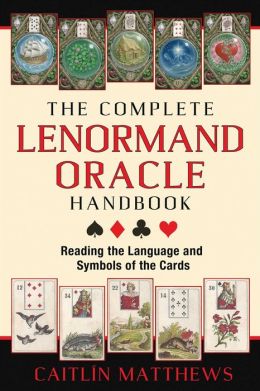 To begin with, I have to say that the word ‘complete’ in the book title is accurate. This book is over 400 pages long and covers every aspect of the Lenormand cards I could think of and then some. I bought my first deck of Lenormand cards to use as I read this book and I found the whole process fascinating. Ms. Matthews begins with history, describing the cards’ origins in the late 18th century Coffee Card divination system. These were based on the tradition of reading coffee grounds, which is similar to reading tea leaves. The cards were named after famed fortuneteller Mlle Lenormad to add a touch of celebrity to them but she did not invent them. They first appeared some time after her death, produced by a German man. I found the history fascinating; it’s not often we can trace the exact history of a divination method to its roots.

Ms. Matthews offers helpful advice for choosing a Lenormand deck, including the suggestion that simpler artwork is better. Unlike Tarot, Lenormand cards don’t involve complex symbology (remember, they’re based on coffee ground divination). The author also provides comparisons between Lenormand and Tarot cards, since many people come to the Lenormand after learning Tarot. Lenormand cards are read in a more straightforward way than Tarot, though Ms. Matthews points out that there is always an amount of intuition required in any divination system. Lenormand cards have no deeper esoteric meaning such as Kabalah or astrology; their meanings are straightforward and refer to ordinary, real-world people and activities. The author also directs the reader’s attention to the Lenormand cards that might be confused with Tarot cards of similar names (Moon, Sun, Stars). They have very different meanings in Lenormand and I found this information to be helpful as I learned how to use the Lenormand cards.

Lenormand readings are based on pairs and triplets of cards, not individually. Ms. Matthews teaches a method in which the cards ‘speak’ in sentences when you lay them out. I found the straightforward meanings and the fact that proximity of the cards matters to be more similar to tea leaf reading or rune casting than to Tarot. The author takes the reader step by step through the process of learning the card meanings and then doing layouts, beginning with simple ones and working through to large, complex spreads. One thing I found interesting is that Ms. Matthews suggests you always speak the interpretation out loud, even if you’re doing the reading for yourself. She also gives excellent advice about constructing a question that will give you a clear and useful answer. As with any form of divination, deciding on the right question is often the most important part of the process.

Most of the chapters have a bulleted summary followed by a self test with answers in the back of the book. This is a great way to make sure you understood the material in the chapter. Ms. Matthews also recommends practicing with the cards every day and keeping a journal so you can see your improvement over time. She also offers fun exercises to help the reader learn the cards, such as doing readings for historical and fictional characters. She offers plenty of practice examples with well-explained answers, which helped me immensely in terms of learning how the reading process works.

The Lenormand cards originated in the 18th century, in a world with different technology and different societal values than we have now. Ms. Matthews does a great job of making the card meanings relevant to the modern world. For instance, the Lenormand card 16 Stars can refer to electricity or wireless Internet and 24 Heart can mean being ‘liked’ on a social network. These meanings are very much in keeping with the down-to-earth sense that the Lenormand cards have always had and work seamlessly in readings.

Much more so than Tarot, the Lenormand cards tell a story. The questions you can ask and the answers you receive tend to be specific, related to everyday life and the material world. You can choose a significator or topic card or let the deck choose it for you. The author offers multiple traditional methods as well as a few she has come up with herself. She encourages the reader to try them all and choose the ones that work best for them.

Lenormand cards are laid out in simple lines rather than the more complex designs familiar to Tarot readers. A Lenormand spread is called a tableau. Each card is read several times, in different combinations with surrounding cards, in order to develop a multi-layered reading and double-check the interpretation. Each card has a set of basic meanings that range from starkly literal to broader interpretations. You have to use your intuition to determine which of the meanings is appropriate for your reading, but you can’t go outside the predetermined definitions. As Ms. Matthews says, the Lenormand cards can be ‘strikingly literal at times’ but there is also a great deal of room for added nuance based in intuition.

The most traditional kind of layout is the Grand Tableau, which uses all 36 cards. An interesting aspect of the Lenormand cards is the concept of Houses, much like the houses on an astrological chart. If you were to lay out the deck in numerical order in a Grand Tableau, you would get the Houses or basic meaning of each position. But in a real Grand Tableau, the cards are shuffled so they don’t land in numerical order. Which House a card lands on modifies the card’s meaning, giving greater depth to the reading. The card plus its House can be read in much the same way as pairs of cards are read in a spread. Ms. Matthews also encourages readers to create their own variations on the spreads once they have reached a basic level of competence.

Learning the Lenormand cards involves taking in a huge amount of information. Though Ms. Matthews makes it clear she thinks the reader ought to memorize the whole deck right off the bat, she does grudgingly offer the option of House cards or a printed cloth that shows the Houses in order to begin doing readings before you have the whole deck plus the Houses memorized. I agree, the ultimate goal is to have all the information memorized. That makes interpretation go much more smoothly. But I suspect Ms. Matthews has greater mental prowess than many of us, and I’m sure she has more experience with a wide variety of divination methods, so what might seem simple to her could be a steep hill for the rest of us to climb.

In addition to standard Lenormand reading techniques, Ms. Matthews offers a couple of different ways to approach the Lenormand. The first involves the meanings of the playing cards associated with each Lenormand card. These meanings are different from both Tarot cards and traditional playing card divination. She offers some interesting ways to use the ‘moods’ of the card suits to add depth to a reading. This method works best on smaller layouts and is largely irrelevant for the Grand Tableau, but I found it to work well in conjunction with the conventional Lenormand meanings. The second unusual technique is what the author calls the Lenormand Universe. This is the mythic structure of the deck which she has uncovered through her deep work with this divination method (she says the Lenormand Universe ‘showed itself to me’). Though the organization of the Lenormand deck is very different from Tarot, the concept is similar. The Lenormand Universe encompasses a universe full of possibilities and is not limited to the everyday activities recorded in the cards’ images. So in addition to the conventional Lenormand meanings, Ms. Matthews offers an archetypal level of interpretation that is new and profound. She has created a new spread specifically for Lenormand Universe readings since this level of interpretation does not lend itself readily to the traditional layouts. Interestingly, she notes that this mythic level of meaning has grown organically from the deck itself and was surely not consciously intended by the creators of the deck or the Coffee Cards they derive from.

As if all this weren’t enough, Ms. Matthews also offers ways to determine timing (days, months, seasons, years) and find lost items using the Lenormand cards. She also offers helpful advice on reading for others, including how to draw boundaries and remain neutral no matter what the cards say. The appendix offers further resources as well.

All in all, this is truly a complete handbook. Ms. Matthews has left no stone unturned– and even discovered a few new ones– so the only thing left to do, after reading the book, is lay out the cards some more.