Gods of the Runes: The Divine Shapers of Fate 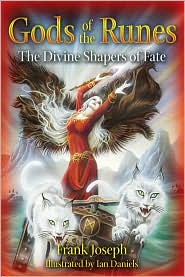 Frank Joseph, editor in chief of Ancient American magazine, is the author of Atlantis and 2012, Advanced Civilizations of Prehistoric America, and other books in a similar vein. Here he turns his attention to outlining a “recovered” basis for rune meanings and names.

In Chapter 1: Rune Quest, the author begins by explaining his unsatisfactory experiments with different divinatory methods: the I-Ching (“negligible results”), the Mythic Tarot (“indefinably icky”), Medicine Cards (an inauthentic “modern contrivance”). During a journey to Scandinavia, he saw artifacts that triggered ideas about the runes. He discovered that rune names currently in use (Fehu, Uruz, etc.) are neither ancient nor original, but were invented after the Vatican issued death sentences to anyone caught using them. He puts forth his theory that the runes are associated with deities, as one surviving rune name, Tyr, implies. An investigator only needed to match gods and runes. Joseph also eschews the 25th blank rune as “bogus,” a modern addition made by Murray Hope in 1985. The runes have time-keeping and calendrical functions, so 24 is the appropriate number; the blank rune sabotages this system.

In Chapter 2: Runic Origins, the author examines archeological evidence of the runes’ antiquity, from cave paintings from the Magdalenian Period (17,000 years ago) to Old European script (Linear A or B, used from 5300-4300 BC). While most familiar alphabets follow an A-B-C format, the Futhark does not, an anomaly that suggests independent development. The author associates Yggdrasil, the Tree of Life, with kundalini energy. Some portions of this chapter are based on wobbly assumptions, but there’s some food for thought, too.

Chapters 3 to 26 feature the twenty four runes. Each chapter supplies a story about the rune’s deity that demonstrates its powers, followed by rune meanings (upright and reversed), the deity’s zodiacal, color, and gemstone associations. Overall there are good mythic ties between the gods and the runes, but a few deity-rune pairs are problematic. A couple of stories that strained credulity to the snapping point and seriously undermine Joseph’s credibility. The astrological associations are highly dubious, and the gem and color associations are shaky, too. For example, Loki, a fire god, is the only god associated with green, which seems pretty strange when there are two earth goddesses.

In Chapter 27, the author supplies a few “ancient” rune spreads, for which – again – no credit is given. One must assume the author devised these himself. The most interesting spread in the chapter is the Life Reading, which uses all 24 runes and can be modified to supply a past-life reading. On page 173 there is a handy table with the deity names, powers, and runes. The book ends with endnotes, a bibliography, and an index.

While it is clear that Mr. Joseph is an ardent researcher, his enthusiasm for Atlantis and similarly doubtful theories taints this book. Some of the assertions and stories are highly suspect and eroded my confidence in Mr. Joseph’s research. The zodiacal, color and gem associations are not well done, either. The author could and should have taken the time to acquire assistance from qualified practitioners, or at least drawn them out on a piece of paper or a cocktail napkin. The clear goals for creating attributions are to make them workable, at least somewhat logical, balanced, and orderly. These do not fulfill any of those aims, so probably won’t be of any use to the reader.

The illustrations by Ian Daniels are gorgeous if inaccurate. Each deity has his or her own portrait in the individual rune chapters, and there are color plates in the center of the book. The male gods are all buff and studly. Erda, the Earth Mother, doesn’t look old enough to have a driver’s license, and none of the women look strong enough to have survived the extremely tough life demanded in the far north. Maybe historical realism wasn’t requested, but it would have added much-needed authenticity to the book if it had been. The artist should have referenced paintings on the interior walls of Crazy King Ludwig’s Neuschwanstein, or even productions of Wagnerian operas, which exhibit beefier, physically impressive specimens. Hefty women meant wealth and plenty of living children; skinny women meant poverty and dead babies. A bit of research would have gone a long way here, although skinny chicks with bigguns are currently alá mode and will appeal to the young and impressionable.

Rune-deity associations make a great deal of sense, as does the assertion that the runes far predate current estimates. The author wades into quicksand with unsupported and unattributed material. I recommend this book for people who are already acquainted with the runes and have read other books on the subject. This is a worthy secondary text, but not everything in it should be taken as factual or accurate. The reader should have enough previous knowledge of runes, Norse mythology, and history to differentiate useful material from the hairballs.