Runecaster’s Handbook: The Well of Wyrd 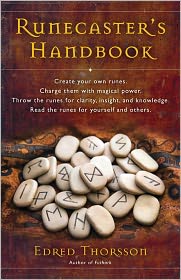 Thorssen is one of the most significant modern authorities on the runes. This book is the third in a trilogy of rune books by this author, following Futhark: A Handbook of Rune Magic [1983] and Runelore: A Handbook of Esoteric Runology [1987]. These were published by Weiser before it was bought out by Red Wheel/Conari Press – that is to say, back in the days when Weiser was a top-notch publisher of metaphysical subjects and astrology books with a cream-of-the-crop stable of authors. The observer might suspect that Thorssen’s a one-trick pony with his subsequent Rune Might: Secret Practices of the German Rune Magicians [1989] and Northern Magic: Rune Mysteries and Shamanism [2002] published by Llewellyn.

This book focuses on using runes for divination. After dishing up a little history, giving an obligatory nod to Guido von List, and taking an equally obligatory swipe at Ralph Blum, Thorssen proceeds to outline a theoretical basis for rune divination. The Scandinavian and Germanic concepts of time and causality are presented, along with Northern European ideas about fate (wyrd) and reincarnation.

A delineation of the divinatory meanings of the twenty four runes follows. These include alternate rune forms, translations of the Runic Poems, a bit of lore, and “bright-stave” and “murk-stave” (positive/challenging) meanings of the rune. These brief meanings reflect the author’s predominantly esoteric and non-materialistic worldview.

Chapters 4 and 5 supply tips for constructing a personal set of runes and traditional (ahem, reconstructed) rituals to be used with rune readings. Thorssen’s chief failing as an author is his unwillingness to supply clear indications of what he’s derived from ancient sources and what he’s made up on his own. His mandatory pre-reading ritual puts the reader in a sacred mindset for casting and interpreting. This formal approach underscores Thorssen’s views on the priestly role of the rune-reader. He dismisses fun or casual readings as inappropriate. Those who embrace the preparatory toke-and-quaff method should be prepared to feel at least a little shame before recalling that the ancient Scandinavian version of heaven was long hall with an endless supply of beer.

Chapter 6 offers a variety of rune-reading methods. It begins with a three-rune reading and swiftly gets more complex. Some divinations are based on casting, while others are based on picking the runes. A yes-or-no method is offered at the chapter’s end. An interesting suggestion is the use of a casting cloth marked into bounded sections that correspond to the different realms of the Nordic cosmos. The sections function like a spread position in a tarot layout.

Four sample readings are given. Two are fairly typical client questions. The third is an inquiry about the one-year progress of a secret magical group, and the fourth concerns a disruptive personality within an esoteric organization. Here’s a shocker – someone’s indulging in unauthorized nookie! Sorry, no scandalous details are revealed. Thorssen’s interpretation method is a good one, but his written samples aren’t very accessible or instructive. Furthermore, most of the divination methods utilize all twenty-four runes and require incredibly lengthy interpretations. This treads into the “too much information” category and will severely strain beginning practitioners.

The questing rune reader will find it necessary to read books from several authors because the general trend in this topic is skimpy divinatory meanings followed by inadequate tips on interpretation. To add to the confusion, various authors have divergent and even contradictory views on these subjects. Thorssen’s take is scholarly and technically correct and he offers a wide range of divination methods, and that’s the strength of this book. But both meanings and interpretation techniques are limited, and that’s its weakness. The author’s strong bias won’t appeal to everyone, either.

The technical merits of Runecaster’s Handbook make this a text to include in a program of study. This writer has plenty of authority, but the reader should have enough experience and discretion to judge what is useful. This book is recommended for intermediate to advanced rune readers. If the reader is choosing between Thorssen’s many rune books, start with the Weiser publications.