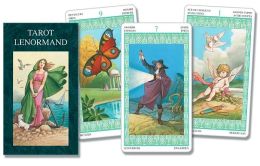 I love tarot cards and have been collecting and reading them since 1977. I am fond of things that connect me to my French roots, especially when it comes to the esoteric, and I was happy to review this lovely deck of Lenormand Tarot cards.

The Lenormand deck is a standard 78 deck of tarot cards designed by artist Edward Fitzpatrick and Lo Scarabo. The deck is inspired by the 36 card deck that originated in Germany and created initially for the card game, Game of Hope.  The 36 card Lenormand deck famous for their connection with Mlle. Anne Marie Lenormand. The Lenormand deck depicts pastoral scenes of life during the Napoleonic Era. They are simple, elegant designs that make me think they were done in watercolor, or perhaps colored pencil. The pictures depict a soft, relaxing, calming energy and the feel moves well throughout the deck. Picking up the cards has a calming and centering effect that is quite nice.

Although the creators of the deck have used Mlle. Lenormand’s ‘petit Lenormand,’ to inspire the Lenormand deck, the basic symbolism of the old Waite Rider deck can be seen in many cards. The Moon, for example, holds the same symbolism as does the Waite, as well as the Devil card and the Sun. Other cards have been changed, but only slightly. Temperance, for example, still pours liquid from one vessel to another, but her feet are both on the ground, instead of one foot in the stream and the other on the bank and the Hierophant no longer has acolytes.

The symbolism is off in other areas. The 9 of wands is confusing because it depicts five mice, a plate with what might be meat on it, and oddly enough no wands. And nothing to suggest nines, either, and the interpretation doesn’t make it any easier. Unless, the creators were trying to inject the Lenormand card “Mice” into the deck, (which is what I think they did) but even still, it makes no sense to do that. The cards in the Petit Lenormand deck don’t match up with the Tarot. They are two different symbolic languages. It doesn’t make sense on a logical, pragmatic basis. It’s like trying to have a conversation in two different languages. You might get your point across eventually, but it would be exceedingly difficult.

The names of each card appears on the far edge of the cards, in six different languages. English, Spanish, French, German and Italian. There are six languages on the cards, but the booklet shows only five. I am not sure what the sixth language is. A green border surrounds the pictures, which takes away from the beauty and simplicity of the deck. It really is distracting, and while checking on various Tarot forums, I noticed that the border was a common complaint.

The insert is written by Lo Scarabeo. It’s a standard booklet you find in most tarot decks. It  contains translations for five of the six languages marked on the cards. The interpretations are concise with upright and reverse readings. I’m not particularly impressed with the interpretations and found that the Waite/Rider interpretations work well for me. Your mileage may vary.

This is a fun tarot deck, but not one I would give to a beginner due to its modified symbolism and the interjection of Petit Lenormand symbolism in some of the cards. It does have a lovely feel and great energy to it, and it makes for a nice deck you can use for meditation or everyday use.