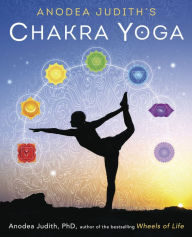 From time to time I have been asked to recommend "the" book on a particular topic. Sometimes I have to provide several, but other times the choice is simple, such as when it comes to the chakras. For years I have recommended Wheels of Life: A User’s Guide to the Chakra System because it is such a clear guide and resource for understanding the subtle elements of the energetic system. Her latest offering, Anodea Judith's Chakra Yoga, will be another highly recommended book albeit for a smaller group.

Focusing on the practice of Hatha yoga, which will be familiar to almost everyone who practices yoga, this is the perfect book for anyone who wants to learn about chakras in a non-traditional manner. If you want to build an atypical yoga practice for yourself, or teach a different flavor or yoga in class, I also recommend Anodea Judith's Chakra Yoga as your instruction manual.

In her introduction, Judith provides a bit of her own background with with chakras and yoga. For her, blending the two seems obvious as the chakras are an energetic system for manifestation and yoga, which means “to yoke,” or hitch two things together, provides the architecture to link the mortal and the Divine together, creating a balance of wholeness and integration.

A full chapter is spent on each chakra, beginning with a chart of the basic principles of that chakra. The charts list each chakra's associated element, principle, purpose, properties, body parts, practices, actions, poses, deficient and excessive states, and masculine/feminine qualities. Judith identifies a keyword for each chakra, which is elaborated upon in the discussion of basic concepts that follows. As an example, the keyword for Anahata, the fourth chakra, is "soften" by moving from a place of doing to being, from effort to surrender, from strength to tenderness, and in doing so opens the gateway to the heart. This concept of softening is put into context with a discussion of the underlying yogic philosophy with sources from Rumi. The author then grounds this discussion into an experience: raise energy from the lower chakras to the heart, bringing upper chakra energy down to the heart, utilize breath so that you can surrender and open from the chest, and staying centered as you open tot he ecstacy of love. The energy practice is followed by a meditative experience, a subtle energy exploration of the chakra and specific breath work.

The chapter continues with a yoga posture flow. Judith states in the introduction that there is no substitute for a skilled teacher and since this is not a comprehensive yoga pose manual, she has made some adjustments. Postures have a basic set of step by step instructions and readers are asked to follow them in order without omission. Guidelines are given for further instruction, as well as benefits and cautions. At the end of the chapter, a posture flow is given with the names of the poses and a small photograph, making a kind of quick reference guide. The selection of which postures to include is not easy as postures influence more than one chakra at a time, or variations of the same pose, or a shift in focus, may impact a different chakra. For this reason, Judith states, “some of the basic poses will appear in more than one chakra.” (Of special note: there is a short partner yoga sequence in the heart chakra chapter.)

Each sequence starts with basic postures that almost everyone will be able to attempt and moves to more difficult ones in a logical fashion. I am not very good at yoga, nor am I very flexible, but I was able to complete at least half of the poses in each sequence. My only criticism is that she doesn't address what the reader can do if they are unable to complete a sequence. For example, the third chakra builds to a desk or table top pose, followed by an inclined plane or Purvettanasana pose (the literal interpretation of which is: intense stretch of the East), which I simply cannot do. But I can manage the next pose in the sequence, the side plank, and the rest in the flow. Do I skip the postures I can't do and only do the ones I can? Do I try my best each time with each pose and keep going? Is there an alternative I'm not seeing?

Judith provides a specific relaxation and focus for each chakra, a kind of theme for working with that chakra. When we work with the third chakra, we are to recognize that change requires energy but it also generates energy. So when we work we are to focus "on the subtle energy that we want to distribute into various parts of the body through the calm direction of the will (p.184)." The sixth chakra, in contrast, calls for softening and refocusing our gaze, shifting our perspective.

As with her foundational text, Wheels of Life, Judith is adept at writing about the often complex concepts so they are easy to understand while retaining their richness. Anodea Judith's Chakra Yoga contains ample opportunities to experience energy, movement, and stillness. While it may challenge beginners, I would state unequivocally that it belongs on the shelf of every person interested in either yoga or chakra work.