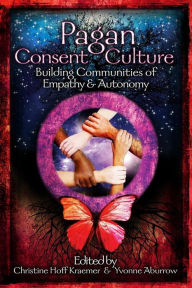 There is a long-standing mythos within the larger pagan community that we are all engaged in lots and lots of sexual activity across genders and that to lack a strong sexual identity is to, somehow, indicate a lack of true identity as a pagan. In all likelihood, these beliefs come from the early days of witchcraft in America and its ties to the rise of feminism and the debut of 'the pill' along with the attendant 'Summer of Love'. The overall lip-service (if not actual support for) to the sex-positive aspects of a pagan life and lack of belief in what the Abrahamic religions call sin contributes to the sexual mythos of our community. And it is true that most of us would agree that being sex positive means that sex is not seen as shameful or sinful, even sacred.

But over the years as much pain as benefit has arisen from our sex-positive culture: predators, so often sporting strong charisma, find easier hunting in a group predisposed to see the best in a person as well as being bound to keep secrets. There was a big blowup online in 2014 when a BNP (big name pagan) was arrested for possessing child pornography and the best that can be said about that situation is that it prompted a LOT of discussion about what constitutes safe in our diverse communities, how to talk about predatory behavior, and about the boundaries we have, create, and share.

Consent, like all notions that place individual wants and desires in tension against the needs of the larger community (think 'justice') requires contemplation and acknowledgement that there might be small variations within a larger cohesiveness. To quote Romany Rivers, "Consent is not the absence of no, it is the presence of yes. (1)"

Pagan Consent Culture arose directly from these conversations, and brings together a diverse collection of opinions and perspectives. At its core,

"This anthology is part of a collective effort to dream a radical new culture into being. In this culture. respect for individual autonomy -- referred to in this collection as "sovereignty," "wildness," "self-possession," and by other names -- is one of the principles that bind us into community." (Introduction, page i)

Edited by Christine Hoff Kraemer, who holds a Ph.D. in Religious and Theological Studies, and Yvonne Aburrow, who has a master’s degree in Contemporary Religions and Spiritualities, Pagan Consent Culture is a natural evolution of their backgrounds and well-curated by their expertise.

We start with an excellent Introduction that actually does introduce the reader to the book -- not only the background of its formation, but also to defining terms like rape culture and consent, but also discussing the reality of violence in our communities, the difficulty of creating consent culture within a Pagan context, and the ethics of sexuality.

The first section "Developing Pagan Philosophies of Consent" provides a collection of tradition- and individual-specific approaches to consent. The writers contributing to this section include John Beckett, Brandi Williams, Yeshe Rabbit, Helix, Sophia Sheree Martinez, Julian Betkowski, Theo Wildcroft, Raven Kaldera, Grove Harris, A. Acland, Thenea Pantera and Sebastian Lokason. Some writers were easier for me to identify with, but I found all of them fascinating. In particular, Williams' discussion of sexuality within a Thelemite context and Rabbit's analysis of consent as a part of the collective as well as the individual and its value within the patriarchy, were excellent. I found Kaldera's essay on power exchanges fascinating while Lokason's description of Godspousery challenged me profoundly.

The second section switches to a more personal perspective as we are brought into the world of the survivors of various kinds of abuse. The contributors include Sarah Twichell Rosehill, Cat Chapin-Bishop, Jason Thomas Pitzl, Yvonne Aburrow, Shauna Aura Knight, Katessa S. Harkey, Kim and Tracey Dent-Brown, Lydia M. N. Crabtree, Lasara Firefox Allen and Diana Rajchel. This section will definitely require 'trigger warnings' for many readers and was the most difficult for me personally. All of the authors provide personal stories of transgression; all of them were changed by the experience. The complicated dynamics of living within a rape culture, the myth that men can't be raped, of age and power intertwining with insecurity to undermine meaningful consent, of how abusers can be heroes as well as monsters, of feeling 'other' within a minority group, of how the larger culture uses language to allow for the crossing of boudaries, of being told by your mentors and leaders to 'give in' . . . . all are discussed with respect and discernment. It made for painful reading. One of the most important concepts the reader may derive from this section comes at the end of the first essay:
"If you feel you might be in a position where your trust and religious oaths are being used in ways that are abusive, or exploitative, please get out as quickly as you can, seek the proper authorities, and talk to counselors and advocates who are experienced in guiding individuals through the emotional and spiritual damage done. (p. 189)"

The third, and final, section provides the reader with tools for creating consent culture within their own communities. Whether parenting, teaching, or working within a group, these essays offer curricula and exercises for making touch both pleasurable and sacred within an ethical framework. The writers here are Christine Hoff Kraemer, Staśa Morgan-Appel, Tom Swiss, Nadirah Adeye, Zabrine Gray, Sarah Whedon, B.B. Blank, Sable Aradia, Raven Kaldera and Jo Anderson. Again, all of these essays were valuable and contributed greatly to the strength of this book. That said, I greatly appreciated Kaldera et al's discussion of Asperger's because people with disabilities have specific challenges often overlooked within the greater community. Anderson's discussion of Gardenerian initiation is important since the sexuality inherent within Gardenerianism makes it distressingly ripe for abuse by predators. Aradia's essay did an excellent job exploring the dynamics of the student-teacher relationship when the topic is sex magic.

I can't recommend Pagan Consent Culture highly enough; I believe it is a truly seminal work for our community. While it might seem hyperbolic, I believe that if you have any interaction with any community -- not just Pagan -- this is a book for you. Read it, find your own use for its teachings, and become another person working to redefine our present, broken, culture into one in which all perspectives are valued as sacred. My own group is entering is 20th year. We have never been plagued by sexual abuse or similar problems, but, in large part because of this book, I will be creating a specific document outlining our groups' code of conduct. We have gotten by on luck before now, it is time to explicate our position on the value of boundaries.