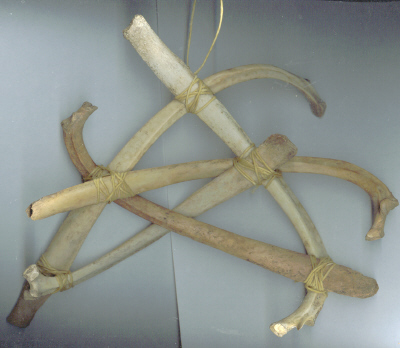 I've known Lupa for a few years now, and have gotten the opportunity to sample some of her amazing artwork.  In describing her artwork, I'd like to first start off by saying that Lupa has a lot of cojones going into business for herself based on the medium she chooses to work with—namely animal parts and remnants.  She primarily acquires these leftover from the fur and taxidermy industry, though she also gains them from forays into nature or a local antiques shop.  Now, I imagine some of you may be about to give into a knee-jerk reaction quite common to those nature lovers when they hear the mention of animal bits.  This reaction, although understandable, does not promote much education or understanding of the hows and whys of this sort of practice unless you take the time to pause and open up your mind to other avenues.  Allow me to explain. 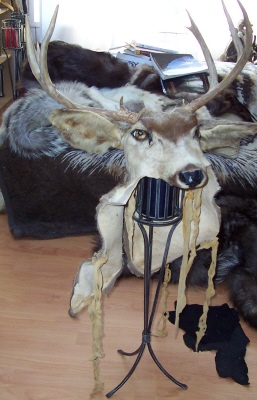 The ritual and spiritual use of animal remnants is quite common among various older pagan cultures, which emphasized communion with animal spirits and energies, and respect and thanks for those animals who gave themselves up for food or ritual purposes.  In the modern age there is a considerable lack of respect or appreciation for the roles animals play.  A wolf is chased down in a snowmobile or shot from a helicopter or plane, its hide displayed on a wall as some shallow trophy of manhood.  A cow is slaughtered and processed without a second thought as to her life or what she is offering.  A vixen who has spent her entire life pacing in a squalid, cramped cage is electrocuted or clubbed to death so that her fur may be worn in a coat by a wealthy woman who doesn't even think twice about the vixen or the brief, horrible life she was forced to live.  Some animals, such as the coyote, are killed simply out of fear or hatred.  They wait for long fearful hours or even days with their legs crushed in traps and exposed to the elements, waiting for the club or the gun that will deal the final blow.  Largely, we have lost our sense of respect and appreciation for these creatures who give up our lives in the shadow of man.

This is where creative scavengers like Lupa step in. 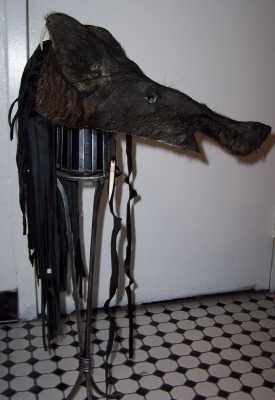 Lupa helps breathe life and spirit back into the mediums she works with—and peace, too.  Each remnant that comes into her possession is first purified of any residual negativity or trauma that may be left over from a painful death.  She is a speaker for the dead, interacting with the spiritual essences of the parts that have come into her possession, and helping to aid them in attaining peace in the hereafter.  This much is reflected in her artwork, where it is evident that the animal spirits express themselves in the working or shaping of a particular piece.  Proceeds from each work of art go to wildlife organizations such as the Defenders Of Wildlife to help support animal rights and conservation.  When initially acquiring these pieces, rarely if ever does money spent go directly back to the trappers or fur industry.

Two of the major works I have acquired from Lupa (with one more on the way) are two dance costumes—a coyote and a white wolf.  A dance costume is a full or partial animal skin affixed with straps (usually made from deer hide) that one can use to tie to their body and wear the skin.  In this way, the user can walk in the footsteps of that animal or 'become' that animal for a time while dancing or using similar exercises to reach an altered state of consciousness by which communion with the spirit of the skin or its archetypal energy can be achieved.  This also benefits the skin too, as it can become a part of a living body for a time, and receive that body's warmth and energies.  I've named both of my skins, and both have been an integral part in helping me connect with canine energies.  When not in use, they lay across my bed, where body heat can continue to be shared at night.

Of course, Lupa doesn't work exclusively with animal parts, although they tend to be her primary medium.  She also works with resurrecting old jeans, bottles, bead findings, anything you can think of.  This, to me, shows Lupa's artist's eye and her ability to find beauty and use in things most of us would probably overlook or discard to the trash heap.  I would recommend Lupa's artwork to anyone wishing to connect further to animal energies, or to anyone wishing for a very nice work of art that they can use for ritual or just for decoration.  Her art pieces are very well-put together and plenty of time, thought and energy goes into their making.  You definitely won't get anything soulless coming from her—which I feel is important when shopping for one's spiritual needs or purposes. 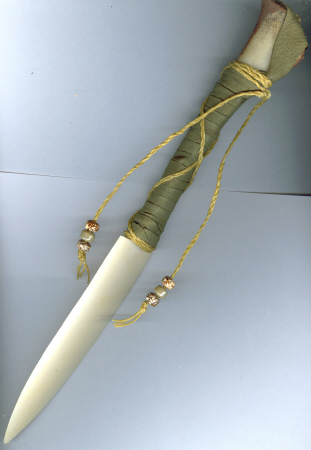 http://www.defenders.org – The Defenders Of Wildlife site, Lupa gives a portion of the proceeds she receives to this group.