Make Merry in Step and Song: A Seasonal Treasury of Music, Mummers Plays and Celebrations . . . 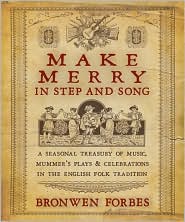 I’ve been in the pagan community for over a decade, and while I haven’t been a part of any formal group for any length of time, I have seen numerous examples of attempts at creative, unique group rituals. Some of these end up being rehashes of the usual Cunningham-mixed-with-something variety. If you’d like to avoid that fate, Make Merry in Step and Song is an excellent choice.

Not all Morris dancers are pagan, or even familiar with modern paganism. However, the traditional English dances are becoming more common at pagan events and rituals; incidentally, I was just at a festival this past weekend that featured one of Portland’s Morris dancing troupes. So this is a wonderfully timed text. Forbes does a lovely job of presenting well-researched information on historical Morris dancing and related practices, a tradition that her own family has been involved in for quite some time.

The book is divided up into the four seasons, along with some other miscellany that didn’t fit into any of those. I was surprised that there wasn’t an introductory chapter on the basics of Morris dancing/etc., its history and context, and so forth. Instead, the history is neatly woven into each of the sections as Forbes describes the relevant dance and celebration. This isn’t just a theoretical text, though. She goes into great detail describing the ritual format, the play scripts, the songs, and the dances themselves.

I’m sure most of my readers are familiar with the Spiral Dance, the back-and-forth-winding bane of the uncoordinated (individually and collectively). While the dances that Forbes describes do take some choreography and rehearsal is recommended, she does about as good a job of illustrating them on paper as one can hope to do, so no complaints there (though if you truly are clumsy, you may want to take the suggestion of using something other than blades for the sword dances). Also, because the rituals are largely dependent on dancing, one’s physical ability may prevent them from fully participating in that regard. However, the songs and other non-dancing portions of the rituals are well-fleshed-out, so adaptations may be made as necessary. And you will need a group to perform these rituals, not surprisingly; this is not a working text for the solitary practitioner (unless you have some friends!).

I think my only complaint (and it’s a small one) is a wish for footnotes or endnotes. Forbes does offer a select bibliography, but no real indication as to which books provided which information in her own writing. This doesn’t adversely affect the functionality of the book, but it does make it frustrating if you want to do more research on Morris dancing and related topics and aren’t quite sure where the best starting point is. (She does offer an appendix with information on where to find further resources, however.)

Overall, though, I really, really loved this book. It’s nice to see a practical text that doesn’t fall back on tired formulae (there are no spells or correspondences awkwardly shoehorned in) and that shows good research as a general rule. And it’s even better to see a topic that isn’t commonly covered, rather than the usual rehashes. I would most definitely recommend this to any neopagan group that works with English folk practices, those who want to try new styles of participatory ritual, and folks who are curious about the application of old traditions to the 21st century.