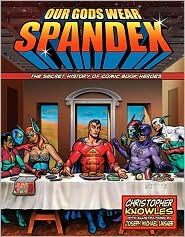 I had a number of reasons for being really excited about reading this book. One, I am a geek. While I’m a bit of a latecomer to comic book geekery in specific, I’ve done a good bit of catching up. Two, I’m also a sometimes-practitioner of pop culture magic (a concept that my husband, who wrote a practical guide on it, introduced me to). There’s really not much about the intersection of occultism and pop culture out there other than some examinations of trends in movies and books in general, so this text pinged a lot of my geek buttons.

The idea itself is excellent: examine the trappings of the occult in various comic books, both from major publishers like DC and Marvel, and smaller indy publishers, as well as the relationship comic book fans have to the characters and stories as modern-day mythology. There’s plenty of material available, some of it subtle, a good deal of it (especially recently) more open.

Knowles most definitely knows his comic books, at least more mainstream ones. He draws on a wide variety of titles, and brings in a lot of little details about their origins (occult and otherwise). He also explains the contexts in which different characters were created and/or revived, particularly social and political issues, which adds significantly to the depth of his research. His research on the various flavors of occultism in and of itself is pretty solid as well; I’m not sure how active he himself is, but if he’s coming more from the perspective of an observer, he’s done pretty well.

His enthusiasm for the topic comes through in his writing, and I’d love to hear him speak about comic books sometime. He makes nonfiction into a story, as his writing has a narrative quality to it. I would love to read just a straight comic book history from this author. This book could have used extra proofreading, as there are some typos, but that’s not on the author.

Unfortunately, the execution of the material wasn’t nearly as good as I had hoped. First, the book feels more like it’s written for the comic book end of the audience rather than the occultists, despite having been picked up by one of the premiere occult and pagan publishers in the industry, and seems to have been promoted primarily within the comic book scene. It’s a book entirely composed of theory and research, rather than any practical material. This isn’t a bad thing, per se, other than that the bias may be a bit disappointing to those expecting more occult-specific material.

The organization of the text leaves much to be desired. The chapters don’t always segue well from one to the next. Additionally, and this is a big complaint on my part, Knowles spends a lot of ink interjecting 101 material both about the history of comics and occultism. Given that there are numerous texts that cover these concepts more than adequately, the space could have been better put to use. The same goes for the bulk of the material on the actual occult aspects of comic book characters. It reads mostly like a laundry list or a high school report; there’s not a lot of analysis of the information amid the statement of the facts. And while Knowles does cite some sources here and there, he engages in a LOT of speculation about the supposed occult influences on various characters. Granted, we know a lot more about the activities of, say, Grant Morrison than we do about Jack Kirby, thanks to interviews and so forth. However, speculation should be presented as just that, not as undisputed fact.

I really think that the laundry list should have been shortened significantly, and a lot of the not-directly-relevant 101 material cut out. What would have been more valuable would have been extending the more solid information that we do have–for example, Alan Moore, Grant Morrison and Neil Gaiman and their occult-influenced works could easily have been given a chapter apiece. While I don’t think the contributions of Kirby and others should have been ignored, I think Knowles missed the chance to go more in-depth with some of these creators and their creations.

The same goes for the “reverent” approach towards heroes that Knowles attributes to many comic book fans. He hints at it here and there, but never really examines it in detail. Given that there are people who work with comic book characters in magical practice, and folks who see them as modern manifestations of ancient archetypes in spirituality, he could have done some research on this sort of modern practice. Of course, he also refers to Joseph Campbell’s work as “obscure” (p. 193), so he may be more mainstream than I had initially assumed (again, reference the heavier influence towards the comic book audience in the book overall).

Finally, one quibble in gender-related terminology I’d like to bring up. On p.167, Knowles states, “In Miller’s stories, Elektra is essentially devoid of a recognizably feminine personality, and became quite square-jawed and muscular in his later renderings. One can even argue that Elektra is essentially a transvestite or transsexual character, and that the trauma of her father’s death effectively removes her femininity” (italics mine). No, no, and furthermore, no. A masculine woman is NOT automatically transgender. Given, however, that the comic book aesthetic relies quite a bit on gender dualities, I’m not surprised to see this misunderstanding of nondualistic gender and sexual identity.

Given that this is the first (to my knowledge) book to explore the occult history of comic books, it’s not surprising that there are some flaws–this is common with the first of any sort of book. Despite my complaints, it’s a good effort, all told, and still worth reading (albeit with some caveats). I’m a pretty picky reviewer, and as mentioned, geeky enough to have nitpicks that other readers may overlook. However, I’m going to give it….

Three pawprints out of five.