The 8 Laws of Change: How to Be an Agent of Personal and Social Transformation 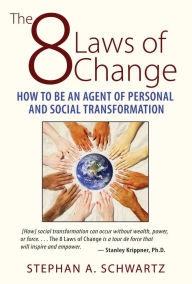 In my lifetime I have had the pleasure (although I use that word with reservations) of being the catalyst for someone to dramatically change their life twice. It is a profoundly humbling experience to be the carrier of such powerful energy, and to see it manifest so vividly. Frankly, I expected Stephan Schwartz's The 8 Laws of Change: How to be an Agent of Personal and Social Transformation to be a guidebook to making that kind of experience a possibility (if not an actuality) again. What I found instead was both far more powerful, and more subtle.

Schwatrtz's 8 Laws are based on his research into the history of America's socially progressive transformations and the discovery that at the core of each are a small group of Quakers. This tiny religion has had a profoundly positive effect on one of the largest countries in the world, how could that be? Schwartz would reply that the Quakers have as a core tenet of their faith a powerful sense of beingness that provides the foundation for others to make different choices. From that, a new norm is born.

Schwartz derived 8 Laws, knowing that adherence to them is not the unique domain of Quakers, of course. Here are the laws:

"Once I understood the role of beingness and how the laws worked, I began to examine other programs and projects. I discovered that the successful ones had all worked out the Eight Laws for themselves and had committed themselves to apply them, although they may never have articulated it that way."

I can only agree, albeit from personal experience that (as Schwartz says on pg 125) “If this research is telling us anything it is that [it] . . .has a neurological basis that cannot be resolved by reason or facts. So where does that leave us? First, we can see that all consciousness is interdependent and interconnected. Second, the fear that is so much a part of American culture today may be arising from precognitive awareness, a presentiment with psychoneurological consequences that in turn has political and social ramifications. Third, this fear response affects a significant percentage of our population.” Many other authors and researchers in and around this field have published data that supports the fact that we (humans) are bascially running on automatic most of the time, and not paying conscious attention unless we actively engage. This makes the idea of “Beingness” (not at all new to religions like Buddhism, mind you) as required to create personal and social change lucid and compelling.

The chapter The Power of Intentioned Awareness shows that modern science is beginning to recognize that meditation can physically change the brain, not only to “benefit higher-order cognitive functions but also alter brain activity”. Then he explains, with crystal-clarity, a step-by-step meditation how-to technique. I feel this is a crucial step to 'beingness'.

Another point Schwartz makes is that change does not need to be immediate. The long view is a perspective that can be overlooked in the rush, the need for the ill to be fixed *right now*. Adrenaline is another poison infecting society, and we've forgotten the value of putting a long-term plan into place, while trying short term plans. That is, take the long view: if a quick fix works, great, but if not, then the long way will right the wrong in the end . . . and its much better than a series of quick fixes that take loads of time and you end up with nothing in the end.

There are many case histories and stories sprinkled throughout. The chapters are short, which was a little off-putting at first, but I began to appreciate it more and more as I relaized that I needed time between them to really consider what I had just read and how it applied to my life. There are few exercises or things 'to do.' This is a book that you need to work at to make your own, but it will be all the better for your efforts.

Whether you want to be the newest Rosa Parks, a good example for your kids, or just join a group already moving to create change that you want to see in the world. The 8 Laws of Change is worth reading, assimilating, and (dare I say it?) distributing to all.

This is not a book full of easy answers, nor should it be. Strongly recommended.