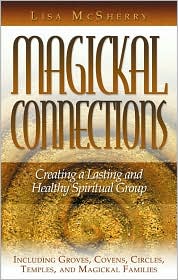 (Editor’s note: While I will often revise or edit reviews I felt that since this one referred to my own work I should leave it alone except to correct a few misspellings.)

With Magickal Connections Mc Sherry offers a great tool for working within and leading a group. She’s straight forward and plain speaking when it comes to group dynamics.  Providing a clear outline of functions, she offers leaders a great tool to cope with running a group. Mc Sherry outlines five functions a leader will have to face and gives a good overview of how to handle these.

In addition, Mc Sherry advises one who wants to start a group to define the purpose, look towards the future and define the ethical beliefs of the group. She discusses different leadership styles; when they work best; and what situations merit a change in style. Mc Sherry covers basic group dynamics providing the reader with an overview of how to create an environment of trust and friendship among the members. She describes activities directed at drawing the group into a comfort zone of familiarity with everyone’s beliefs and personalities. Additionally Mc Sherry covers topics like mentoring, group life cycle, cohesiveness, conflict within the group and continuity.

Throughout the book, Mc Sherry provides exercises and meditations to help the leader in almost any situation.  These are thoughtful and relative to the topic. Mc Sherry has avoided the downfall of giving superficial busy work for exercises.

Mc Sherry states in her Introduction that she is making generalizations about Paganism. Her positive generalizations allow the reader to take her general rituals and meditations and tailor them to their specific belief system.

Mc Sherry handles the tough topic of conflict within a group in a thorough, common sense way. She gives examples of her own personal experiences which help the reader better connect with her message. In the chapter on conflict, she covers how to handle difficult people. She defines ordinary conflicts and how to cope with it. In addition to handling this tough topic, Mc Sherry reminds the reader that conflict is sometimes required for change to occur and evolution of the group to move forward.

Mc Sherry’s exercises, meditations, and rituals are clear and simple. This gives the reader the opportunity to customize as they want. In one meditation she uses lava as a healing device which is vastly different from the destructive role lava usually plays.  This illustrates her unique perspective as well as offering the reader a new way to connect with earth and fire.

Mc Sherry writes in a wonderful conversational style. She offers the reader a realistic view of how to develop and work with a group. She discusses the pitfalls of being in a group whether magical or otherwise. She does speak specifically about the pitfalls of a magical group as well as the differences between an on-line group and an in person group.

Mc Sherry uses pronouns formatted like s/he or him/her in her discussion. In the beginning of the book, she appears to put the female gender first when she is talking positively and the male gender when she talks negatively. As she goes on in the book this meshes in a much less biased way.

Overall Mc Sherry has created an excellent resource for anyone who is considering starting a group or anyone in a leadership role to cope with the complexities of being a leader.  This will be a great addition to any reader’s library.