When in Doubt, Make Belief: An OCD-Inspired Approach to Living with Uncertainty 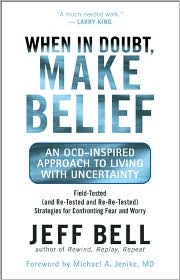 I didn’t expect this book to be about what it is about: I somehow thought it was going to be something along the lines of the latest positive-thinking bible. I thought ‘OCD inspired’ was a joke. I was completely wrong. Author Jeff Bell suffered from OCD, a debilitating problem that is difficult to recover from. He did, and brings the lessons learned to his readers in When in Doubt, Make Belief: An OCD-Inspired Approach to Living with Uncertainty.

While Jeff Bell draws extensively from experience and uses the principles of cognitive behavioral therapy as his building blocks, he also enlists the expertise of more than two dozen contributors, from bestselling personal growth authors Sylvia Boorstein and Dan Millman, to some of the nation's leading authorities on anxiety and motivation. He also illustrates the principles through interviews with five remarkable "believers" including former White House Chief of Staff (and current CIA Director) Leon Panetta and legendary actress/advocate Patty Duke.

Obsessive compulsive disorder (the "doubting disease") afflicts a relatively small number of people, but the principles and strategies outlined herein would be useful for anyone overwhelmed by uncertainty. Bell distinguishes between healthy and unhealthy doubt while providing a series of questions to help the reader discern which s/he is experiencing. Unhealthy doubts, for example, stem from emotional reasoning which leads to confusion, trouble, and is one of the ten distorted thinking patterns that trigger anxiety as well as depression. The more constructive alternative, intellect-based doubt, relies on “reason, logic and rational deduction,” prompting caution rather than action.

I found his Ten Steps out of Doubt valuable and offer them to you here:

1. Choose to see the universe as friendly
2. Embrace the possibility in every moment
3. Affirm your universal potential
4. Put your commitments ahead of your comfort.
5. Keep sight of the big picture and the Greater Good
6. Claim and exercise your freedom to choose
7. Picture possibility and "direct" your attention
8. Act from abundance in ways that empower
9. Accept and let go of what you cannot control
10.Allow for bigger plans than your own to unfold

Through stories, interviews, and trademark humor, readers will learn how to: distinguish between intellect-based and fear-based doubts, identify and steer clear of six "trapdoors," get unstuck in ten steps, identify motivators against doubt, and make decisions with purpose, among others. I found it easy to read, interesting, and helpful. Recommended.