Mind Wars: A History of Mind Control, Surveillance, and Social Engineering by the Government, Media, and Secret Societies 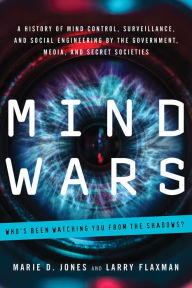 The authors do paranormal investigations on ghosts and aliens, along with interests in new science and metaphysics. Larry Flaxman is affiliated with ARPAST, a paranormal research organization. Both authors appear at conventions and give TV and radio interviews.

“Mind Wars” is a catchy, sensationalistic title but the contents don't fulfill the promise of the long-winded subtitle. This is an au courant topic as modes of privacy-violating surveillance, data collection, electronic and digital methods of mind control leap into fast-forward with the blistering pace of scientific progress. Chapters 3, 4, 5, 6, and 8 discuss 20th and 21st century mind-control methods and invasive surveillance techniques that are cataloged and quickly described for the reader. Although the book is peppered with dates, the lack of orderly or coherent presentation disqualifies it from being a “history” of the subject.

The topic of mind-control, surveillance, and mass media manipulation of the public are, of course, extremely important and worthy of attention. Eye-in-the-sky cameras, cell phones, televisions, computers, and all forms of social networking are means of gathering intel on everyone who owns such devices. These devices are also potential conduits of subliminal message delivery. There's a chapter on the mind-control methods used by gurus in extremist cults. Other insidious topics include the CIA's MKUltra program, V2K (voice to skull transmissions), tracking implants, microwave pulse transmissions, cyber-stalking, directed energy weapons, satellites and drones.

Chapter 2 - Rituals and Rites: Mind Control In Our Past is a hodge-podge of uncredited statements that is irrelevant to the rest of the book. It should have been cut, particularly since the authors whine in the Author's Note on page 15 that “...we as authors have this little thing that publishers impose upon us called “word count,” and we are forced to leave out many topics and tangents that readers might be interested in.” (There are enough dangling participles in this book to start a grammatical nudist colony.)

Jones and Flaxman use the spray-and-pray machine-gun method of information delivery: topic after topic is introduced and given superficial treatment. The reader is occasionally treated to some specifics, which are invariably lengthy quotes from other sources (no permissions appear anywhere in the book). The lack of citations and endnotes makes it difficult to verify the authors' information sources. The writing tone swings from low-key to near hysteria, making the content yet more difficult to digest or to apply critical thinking to the quality of the content. Bad sentence structure and typos add to the strain placed on the reader. The bibliography is awfully brief for the number of topics that are discussed. There is an index. I'd be more willing to accept the lack of citations from a self-published work, but not from a mass-media paperback from a traditional publisher. These topics have been treated by serious journalists, so authors who want their book taken seriously had better step up to the plate.

There's a chapter on the salutary use of mind-control methods for personal improvements and inner development, but it's squashed between Chapter 6 (Weapons of Mass Distraction) and Chapter 8 (Get Out of My Mind). It would have been helpful if this chapter and the scattered remarks about foiling surveillance systems, microwave pulse attacks, etc., was collated and presented as a final remedial chapter. One suspects that coherence was a low priority in the rush to get the manuscript in print. The negligent editing, sloppy organization, and lack of citations are glaring clues. The result is a text that's about one step above the junk journalism featured in The National Enquirer or The Star. It just has a prettier package and is free of ads for penis enlargement and reverse mortgages.

These paranoia-triggering topics deserve more sensitive handling! Many of these inventions and techniques have good and bad applications. Much depends on who's finger is on the control button, and whose agenda is driving (and funding) research, development, and deployment. Government, the military, and big corporations are increasing their influence and control over the average citizen's thoughts and behaviors. Legislation isn't keeping up with these violations of privacy. The Patriot Act and subsequent bills have made it easier for government bureaus, law-enforcement agencies, and corporations to gather trillions of terabytes of information on citizens. With diversions that include the attacks in 2001, the Iraq War, the 2008 Crash, and the ever-widening inequity gap, citizens have had little chance to give this problem adequate attention. Now it's a many-headed hydra that's nearly beyond all hope of control.

“Mind Wars” is a superficial introductory overview that may leave readers feeling angry, defenseless and violated. The topics covered from Chapters 3 to 9 are important but the writing doesn't do justice to the subjects. It makes me want to find books on this subject by writers who are qualified to address these topics in a serious, scholarly way.

Liz's Acid Test: Do trees deserve to die for the production of this book? Thumbs down!