Becoming the Witch: The Art of Magick 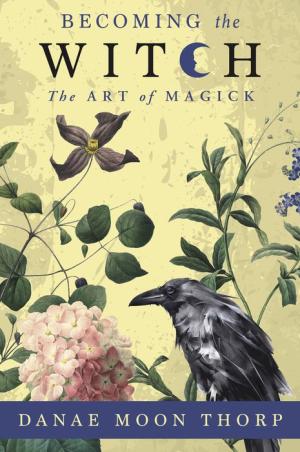 "Becoming the witch is an intriguing path, both simple and complex. There is no doctrine involved, no one tells you what to believe in. It is a way of seeing life, yourself, and others in a magickal way. It is imaginative, creative, practical, and powerful. It is a way to find meaning and to meet every beautiful and strange aspect of yourself. It is a way to transform." (p. 2, Introduction)

The author initially describes spells as something that can be done as you read the words, as long as they are read with intention. I find this attitude problematic, and the fact that spellwork is offered long before the actual chapter on how to do spells (ch 3) is impractical for a true beginner. Even then, the reader is not given a method by which to create sacred space, that comes in chapter four. And Thorp's description of creating sacred space is lovely as well as useful. It just comes very late, relatively speaking; sort of like being given a model, paints, and brushes long before instruction in how to mix the colors or perspective.

At the outset, the reader learns that Thorp adheres closely to the threefold Goddess of moon phases (waxing, full, and waning) corresponding to a woman's age (youth, maturity, and elder). Interestingly, however, she adds a fourth phase of the moon, the new moon, which is also a Grandmother. For newcomers, I can only imagine this would be confusing (the waning moon is chtonic and the new moon is a portal?). Throughout the book, almost all Deity references are female, although there are (very few) mentions of God, there are no stories given, or spells to work with him. A few

The four chapters focusing on the elements were well-thought out and  full of interesting ideas for working with each element. The next chapter (nine) shifts the focus as it discusses a Witch's Purpose Seemingly that purpose is to do spells as there is no other objective provided. The reader is redirected again in chapter ten as Thorp discusses the tools of a witch. The common four (wand/fire, athame/air, chalice/water, and pentacle/ earth) are joined by the besom (aire, fire, and earth), book of shadows (air), bell (air), mirror (water), and mortar & pestle (earth). The associations made between the elements and tools are good, as are the attunements, but this is another chapter best read from an established foundation rather than as a beginner.

Chapter eleven looks at some of the symbology used in witchcraft, a discussion continued in the next chapter. Chapter thirteen, The Witch's Craft, focuses on making charms and talismans (although previous chapters included some charms). Chapter Fourteen -- the longest chapter in the book -- continues the charm making with techniques for burning, binding, blending, burying, and brewing.  Chapter Fifteen concerns the familiar, recognizing, summoning and working with.

Chapter Sixteen discusses the fae and I found most of the chapter problematic. Thorp barely acknowledges the wild power of the fae and instead concentrates on the (incorrect) fun fae, like leprechauns and brownies. Erecting an altar to the fae as a beginner is foolish, if not actively dangerous. Witchcraft and the fae are not naturally compatible, nor are Elementals (such as mermaids or salamanders) fae.

With Chapter seventeen the reader is introduced to the wheel of the year which Thorp envisions as, "the story of the Goddess and the God as personifications of Nature." Thorp declines to tell that story, however, and instead offers spells and rituals working (almost exclusively) with the Goddess. Here is where the author's presence in the southern hemisphere becomes obvious, and readers in that region may rejoice in having "proper" seasonal alignments offered.

In Chapter Eighteen Thorp talks about her journey as a witch, from giddy newcomer to seasoned and wise. To my mind, this should have been the last chapter.

The final chapter, The Witch's Cabinet (chapter 19) Thorp provides a list of items she deems necessary to carry out the work of a witch. After repeating the lists of tools, utensils, and accessories from previous chapters, the reader is given the fairly typical listing of herbs (basil, mugwort, etc.) and their uses. The chapter ends with recommendations for smudges, essential oils, and salts to use. Disappointingly, this chapter was the only place in the book where ethics were discussed, in relation to making good choices about where you source your feathers, oils, and candles.

In many ways Becoming the Witch is a lovely read, offering a romantic vision of how a witch works her magick* and chock-full of original (and lovely) spells. It is, however, not for beginners. This is a book made for those who have already learned the fundamentals of witchcraft and can interpret Thorp's lyricism through the lens of practical knowledge.

* I'm using a "k" at the end of this work because the author does.