The Hearth Witch's Year: Rituals, Recipes & Remedies Through the Seasons 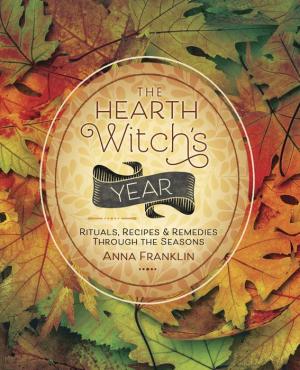 "My year as a Hearth Witch is a cycle—the balmy days of spring, when life returns and I begin work on the garden and go out to collect nature’s first wild gifts. The full days of summer, when I am busy weeding and hoeing, collecting and preparing herbs and remedies to see me through the year. Then comes the abundant bounty of autumn, when the hedgerows are full of wild fruit and nuts, when all the work on the vegetable plot pays off and I get busy preserving it, freezing and canning, making jams and wines. Finally come the frozen days of winter, when I cleave to my hearth fire and turn my attention to indoor activities. Then the year begins anew and the whole cycle starts again, never the same twice but a continuing cycle nonetheless. The magical and spiritual rituals I celebrate throughout the year reflect this cycle." (from the Introduction)

Organized by month, each chapter opens with a bit of lore about the month, then delves into special days. Franklin calls September the "Month of Completion" and says:

"September is a gleaming month of ripeness, when the red apples are ready for picking, branches bending under the weight of their fruit. We collect blackberries and elderberries in the hedgerows, hands sticky with purple juice. The grapes are ripening on the vine. Mushrooms sprout and fruit under the harvest moon. It’s a busy month of picking and nutting, preserving and storing, making cider and brewing beer. For the Anglo-Saxons this was haefest monath (harvest month); in Gaelic an sultuine, the month of plenty; in Welsh medi, the month of reaping."

More information follows about how this is a harvest month, and the special attention paid to the reaping and associated rituals. She then describes the significance of the equinox and underlying mythos. The special days in each month may include special rituals or foods to make and offer, or consume. For example, June 7th is sacred to the Hearth Goddess, the Greek Hestia:

"As the domestic hearth is the sacred centre of the home, the hearth of the gods is the centre of the cosmos. According to Plato, the twelve Olympian gods, who represent the twelve constellations of the zodiac, circle the House of Heaven, while Hestia remains still at the centre, tending the hearth, which is called “the Everlasting Place.” Her name, according to Plato, means “the essence of things”—a formless essence symbolised by the flame, which flows through everything that has life."Franklin later describes a Celebration of the Hearth Goddess: "Since the Hearth Goddess represents the purity of fire and the security and prosperity of the home, safeguarding the wellbeing and security of the inhabitants as well as its wealth and supplies, I think it is important to honour her even during the summer months. I never forget that she is the essence of life and the hearth keeper of the gods. Though there is no fire in the hearth in summer, I keep a candle burning on the mantelpiece (you could do this on your altar if you don’t have a hearth) and make regular offerings. Today I will put flowers on the hearth and make an offering of incense to the Hearth Goddess."

This is a wonderful, rich, detailed, and well-annotated collection of information for the entire year.