The Living Temple of Witchcraft, Vol 2: The Journey of the God 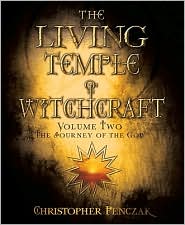 I will admit from the outset that I am an admirer of Mr. Penczak and nothing about The Living Temple of Witchcraft, Vol 2: The Journey of the God changes my mind about his ability to convey serious information in a way that makes it accessible to a wide audience. This is a well-written book that will assist a serious practitioner to be a high priest /ess in a magickal group. It is also the final volume in the Temple series, making a total of six volumes and accompanying CDs.

This volume is not for newcomers to the Craft, but for those wishing to explore being a leader and taking a larger role within the Pagan community. Every witch has a personal connection with the Divine – that’s a basic component of our beliefs – but not every witch has the desire, or skills, to also take on the role of priestess to others. Mr. Penczak sums it up beautifully “No matter how much training they have had and how confident they are in their abilities, few think they are ready to the a high priest/ess.”  I believe there is even a sort of ‘rule’ of witchcraft which says that if someone *wants* to be a high priest/ess s/he isn’t ready to be one.

But then, one day, the call comes. A witch is told to be clergy, and for that role there are many skills to be developed and patterns to set, as well as one’s own Will to keep focused. The Living Temple of Witchcraft, Vol 2 uses a diverse set of myths and patterns overlaid onto the 12 signs of the zodiac (i.e., the gifts of the Goddess, labors of Hercules, Tools of Import, and the Goals of a Witch) to take the reader through a cycle of teachings that focus on just those skills that a high priest/ess needs. Unlike other books on ritual leadership, Vol 2 maintains an ongoing focus on one’s relationship with the Divine and the mysteries that accompany our working with Them.

The perspective is varied, unique, and thought-provoking. For example, the chapter on Aries includes both Maslow’s Hierarchy of Needs and a discussion of witchcraft and weapons. The chapter on Virgo includes ministry, healing, and a discussion of professional (paid) clergy. Although I didn’t have time to ‘work’ with all of the material provided, I recognized many aspects I’d had to discover the hard way during my own early years of being clergy, as well as a number of tasks I am going to make time to explore as part of my own growth and exploration.

Christopher Penzcak is breathtakingly prolific: in eight years he has produced 20 books and CDs, each distinct and (most astonishingly) non-repetitive. Oh, themes are repeated, of course, but unlike some authors Mr. Penczak doesn’t feel the need to lift whole pages from previous writings to fill out a new work. He just writes on a new topic and allows his voice to tell the reader what we need to know. I have reviewed most of his works, own nearly all of them, and have only the highest respect and admiration for this author who has done so much for our community.