The Holy Book of Womens Mysteries 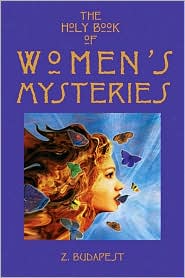 Budapest is a talented writer who weaves a beautifully written thesis from a persuasive and passionate point of view. For Dianic followers this book offers a well presented look into Dianic and feminist witchcraft.  However, Budapest encourages women to treat men negatively. She uses this as a call to arms to motivate women to take back their own power. Which is a good thing but she steps over the line by blaming men for all the wrongs in the world and telling women to essentially treat men like second class citizens.  Additionally Budapest makes a variety of claims which may appeal intuitively to many witches but are not necessarily supported with current archaeological and historical data.  Her discussions cover the typical topics in most Pagan books, like tools, rituals, divination but in some areas she covers very little detail and in others makes bold statements which are not supported in the medical community.

Budapest discusses the proper way to acquire witchcraft tools. She is very rigid. Similarly she is very complex in setting up a ritual with 14 basic steps outlined. Conversely she does assert the need to be fluid in the execution of rituals, even going so far as to assert that spontaneous prayer is more powerful than memorized prayer.  While she encourages discarding patriarchal traditions, her rituals very closely resemble a Catholic mass.  Even though the affirmations she includes are beautiful, she encourages the reader to go with off the cuff chants and affirmations.  Budapest seems to wobble between rigid protocol for rituals and taking a “go with the spur of the moment” improvisation for chants and other parts of the ritual.

Budapest offers great rituals for women specific events like first menses, conception, menopause etc.  The self blessing she includes is good for improving body image and self love.  Yet she ridicules a woman who remains in a monogamous relationship, asserting that such a person cannot embrace a “feminist Pagan way”. (pg 71 Oakwoman)  In contradiction again, she provides some very interesting rituals for boys and men to worship the goddess.

Budapest touches on core values missing from our society.  However, during her discussion she slams men in general and this detracts from her key message; so that the message concerning the values is lost in her feminist rhetoric.  For example in her genesis story she essentially puts women in the male role; changing female dominance for the Christian male dominance.  Her writing is beautiful, lyrical, and mystical until she goes on a man hating tangent then it becomes tedious and tiresome.

As expected, Budapest covers the typical rules and ethics of working within a group.  One area she strays from most Pagans is in solo practice. She asserts that it is a vital part of spiritual practice for every witch.

In covering some of the typical areas of paganism and witchcraft, Budapest is sadly lacking in some areas but makes outrageous claims in other.  In a chapter called “Prophecy”, Budapest covers runes in a very short paragraph barely touching on the topic.  For the tarot she uses her own interpretation for the cards.  When she covers topics like astrological birth control, she asserts her beliefs which are questionable when it comes to safety and well being.  She perpetuates myths about women’s cycles going so far as to say menstrual symptoms like cramps and bloating would not be experienced if the woman were in optimal health.  In essence she is telling women if they were fit then they wouldn’t have any issues.  Yet this has not been the case medically speaking.  Even fit women have issues with their menstruation.  She takes a complex process within a woman’s body involving a wide variety of factors from genetics, and hormones to environment and health and tells women if they are having problems then they aren’t in the right shape.

When discussing historical and ancient practices, Budapest fails to provide appropriate support data to back up her claims.  In her discussion on old shrines like Stonehenge, she asserts the rites were carried out by women.  Yet she offers no data to support this theory.  Similarly, she discusses the change in Greek myths from matriarchal to patriarchal but offers no references to support her beliefs but presents the information as fact.

Again when Budapest tackles the topic of shamanism, she speaks with a certainty about historical practices which have not been documented.  While this is intuitively pleasing, there is not currently historical proof supporting her version.

While Budapest presents a unique perspective and interpretation, she offers no proof of how she came to these conclusions. She is presenting her personal beliefs as historical fact.  This prevents objective interpretation of new finds in these areas and makes it harder to get a fresh look at old data.  By presenting these beliefs as historical fact, it calls into question the other data presented in her book.

If Budapest presented these ideas and beliefs as her intuitive conclusions, this book would be more believable.  But she presents these ideas as hard facts but doesn’t provide the data to support her facts. So the reader may become very skeptical of the information presented.  Additionally any reader who has good relations with men will find this book too radical and extreme on the feminist front.

While Budapest is a talented writer, she seems to have stepped over the line on this book which limits its appeal.  Her hard core feminist stance will distance any reader who has a positive relationship with a man and alienate the moderate feminists with her extremism.  Her questionable facts and in some cases dangerous statements make it difficult to trust her practices.  While Dianic and feminist witches may find this book useful but it lacks appeal for the general Pagan population.

[Ed. Note: This review refers to the re-published edition of the two books originally printed in the early 1980s. The books were not extensively revised, but include a new introduction by Z. Budapest, in addition to essays by luminaries such as Starhawk and Merlin Stone.]