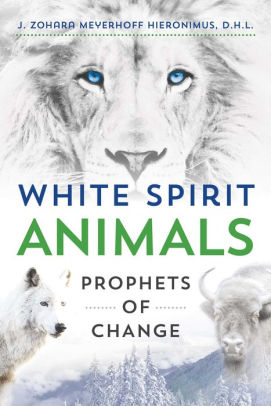 According to her bio, Hieronimus has a background in radio with a focus on social justice and environmental activism. In White Spirit Animals she discusses the symbolism of five specific animals: bear, lion, elephant, wolf, and buffalo. In a final section of the book, she discusses mythical or older beings. White Spirit Animals is well researched: mythology and animal facts from a variety of sources including Native Americans, Europe, India, Sri Lanka, and other places are used. Each animal chapter has a white spirit lessons section which is where she discusses the importance of the white version of each animal. That's the positive.

The book starts with a lot of academic language and phrasing, but the author quickly settles into a more conversational style as the text continues. Stylistically, by the end of the first chapter, it is uncertain where this book is going and it's confusing as to what she truly wants to accomplish within this book. She gets off track on a variety of tangents and the reader is left wondering where the animals are.

Moving into the chapters about the actual animals she discusses modern-day associations that aren't startling or unusual. For instance she talks about Smokey Bear and Goldilocks and the Three Bears and Yogi and Boo-Boo Bear. From these modern references, she shifts into discussing ancient images of bears and how the white spirit animals work within the imagery. In my opinion, the author wanders in areas unrelated to the overall topic of the book. One example is when, in the middle of a discussion on mythology she makes the leap to go into a modern problem. While such a juxtaposition isn't terrible on the face of it, it undermines the authors' credibility when the information our forbearers were conveying is completely different from what modern people will read into it. (Think of Leda and the Swan, which we now see as a tale of rape.)

The final chapter appears to be more about her view of environmentalism than the promised mythological  creatures like giants, white dragons, and the like. Here Hieronimus talks about the stories, but doesn't reference them and it comes off much more as explanations based on her personal beliefs about how they became extinct (tl/dr: humans are bad and we need to protect the animals better).

Throughout White Spirit Animals, the author spends a lot of time quoting Stanley Krippner and discussing his beliefs and theories in a manner similar to how a teenage girl gushes over some a celebrity. In the first chapter particularly, Krippner is comes across as the be-all-and-end-all for Shamanism and psychology.

This book teeters between being an academic book and a personal essay on the importance of white spirit animals. She includes psychology, anthropology, zoology, mythology, and a variety of other topics including environmentalism and animal conservation. She also attempts to discuss the use of these animals in Shamanism. Unfortunately, it fails at being academic except in the very beginning when the language and structure is difficult to read. It also fails at being a thorough or clear direction on how to connect with spirit animals regardless of color. The book does not drive home the importance of the white animals as she reports. The white spirit animal section is a few pages in each chapter lost in a sea of tangents and departures from the topic.

In the end, this book is not recommended.