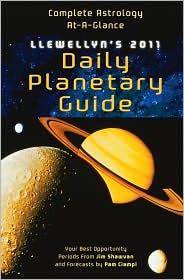 Caveat emptor! For the Latin-impaired, that means “the buyer beware!” The 2011 DPG contains the usual introductory material: the much-recycled “Introduction to Astrology” by Kim Rogers-Gallagher, eclipse dates, retrograde dates, planetary phenomenon, and the 2011 weekly horoscopes by Pam Ciampi. A planet and asteroid ephemeris is in the back of the guide.

The calendar pages are in the middle of the guide. These pages (from pp 80 to 186) contain significant errors that unsuspecting or beginner astrologers won’t spot immediately. Here’s a list of the errors I’ve caught so far (and bear in mind that there could be more):

(correct information for the Full and New Moons is from “The American Ephemeris for the 21st Century 2001-2050, revised 2nd edition by Neil F. Michelsen, ACS Publications, c 1982)

Please alert friends who purchased this guide; copy these corrections and pass them along. There can’t be three full moons in Libra in one year – it’s an astrological and astronomical impossibility!

Ordinarily I recommend DPG as a useful primer for beginning astrologers. The introductory material isn’t inspired writing (you get what you pay for when you pay 75% below normal journalistic rates) but its adequate for newbies and includes tables with the planet, sign and aspect glyphs and offers basic interpretations of signs, planets and aspects.

Every year I find a few mistakes, but this year they’ve really outdone themselves. If their standards fall any lower, they’ll have to relocate to the southern hemisphere. As a long-term customer, I’ve watched useful features disappear from this annual, only to be replaced by less useful and even annoying features like the “Opportunity Periods” by Jim Shawvan. These notes clutter up the space intended for writing in appointments and personal notes. Shawvan might be a wonderful writer, but it’s hard to tell since he’s limited to sentence fragments.

Asteroid aspects have been dropped from the daily aspectarian lists. One year the asteroid ephemerides were dropped. Mobs of astrologers screamed and stomped their tiny feet over that omission, so the asteroid ephemerides have been reinstated. Minor planet-to-planet aspects, lunar occultations, star alignments, and parallels have never been included, but should be. It’s really sad: the PDG that could be a Cadillac but is limited to being a Hyundai.

The only serious competition to Llewellyn’s DPG is Maynard’s Celestial Guide, which contains roughly the same data in the same format. Llewellyn’s comes out in August, while Maynard’s guide is not available until late October. This is too late for people (like me) who schedule events six months to a year in advance.

The dubious virtues of the DPG are somewhat ameliorated by the $12.99 cover price, which can be reduced to $9 with the discount from Amazon. Even so, would it really put a crimp in the budget to peel off a few bills to pay an astrologer to edit this publication and check for mistakes? It would be the spiritually evolved thing to do.