Chasing the Dragons: An Introduction to Draconic Astrology 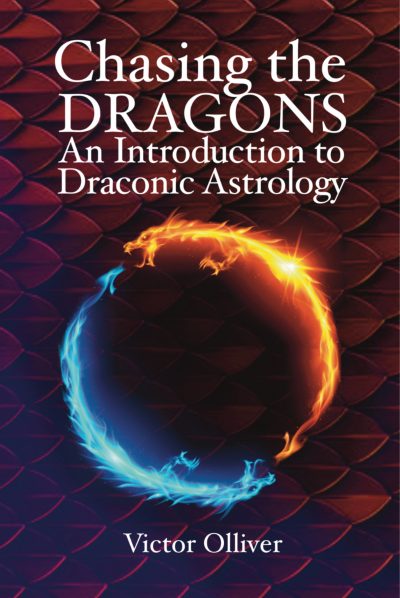 Our astrological birth charts provide a phenomenal amount of symbolic material for understanding ourselves better: our talents, challenges, and even-- when read from certain perspectives-- our destiny and spiritual purpose. There are about as many ways to approach all of this as there are astrologers.

Draconic astrology is a way of casting what author Victor Olliver calls a supplementary specialist chart to address questions such as: Why am I here and what is my mission in life?  It’s not a technique for beginning astrologers. But it is something, I think, that every astrologer ought to know about and consider using when studying their own charts as well as those of clients.

The word draconic means like a dragon. Ancient myths in various cultures taught that lunar and solar eclipses were the result of a dragon living in the nodes of the Moon. The nodes are not bodies in the sky. They are astronomical points where the Moon’s orbit intersects the ecliptic, which is the apparent path of the Sun in the sky. The point where the Moon’s path ascends is called the north node, and where it descends is called the south node. The pair of opposite nodal signs changes about every 18 months. When a New or Full Moon falls within a few degrees of the Moon’s nodes, that’s an eclipse.

Draconic astrology is a lunar astrological technique, dating back to the Mesopotamian civilization. From there, the history of draconic astrology is murky, Olliver notes, though it enjoyed a kind of revival in the middle of the 20th century, when astrology charts were still drawn by hand. Calculating charts is now easy, with computer software at every astrologer’s finger tips.

The draconic technique is to set the lunar north node (destiny, future) at 0 degrees of Aries, which is the starting point of the zodiac. Next, you calculate the difference by degrees between 0° Aries and the natal degree of the lunar north node. Then you move each of the planets forward by the same number of degrees. This generates a draconic chart with all of the planets in the same houses as they occupy in the natal chart, but all in different signs. With the sign changes, this second, stand-alone draconic chart changes the elements and modes of all planetary placements, thus giving a whole new meaning to one’s Sun, Moon, etc. Then, using software or by hand, you make a third chart, which Olliver calls a synastry of self chart, by placing the natal chart in the middle of a bi-wheel, with the draconic chart on the outer wheel, showing how the draconic placements interact with natal placements.

The book has a slew of celebrity charts including many of the usual suspects found in astrology teaching (the British royals, Karl Marx, Nelson Mandela, Oprah Winfrey, et al.)

My favorite, though, is the case of Greta Thunberg, the young Swedish climate activist. She’s young enough that there’s no telling yet how her life will unfold, but the clues are in the charts.  Without a known birth time for her, the draconic technique works anyway because the lunar nodes move so slowly. Natally, Thunberg has Sun, Moon and Chiron in Capricorn. The New Moon in cardinal, earthy Capricorn is initiatory and striving. Her lunar north node in Gemini speaks to someone whose destiny revolves around communication. The draconic chart shifts the Capricornian cluster to Scorpio which Olliver considers “an alert that a central part of Thunberg’s life purpose involves a resolution or determination to fight.” (Scorpio is ruled by Mars.) Next, the bi-wheel of Thunberg’s synastry of self chart reveals a striking feature:  draconic Jupiter precisely conjoins Thunberg’s north node in Gemini. Olliver calls this “an old head (Jupiter) on young shoulders (Gemini, sign of youth.)“ He notes that, for better or worse, this could confer on Thunberg  a kind of guru status. ‘Her soul,” he writes, “has taken on a huge task.”

Draconic astrology is not intended to supplant the natal chart but to supplement it by shedding the light of the Moon’s mysteries on a given life. I tried it with my own chart and was taken by the results. The draconic chart accurately displays my life-long quests for emotional healing, spiritual knowledge, financial security, and career achievement.

This has me concluding that by highlighting what a person may already know to be true about themselves, draconic astrology can offer someone faith and confidence that they are on the right track.