The Twilight of Pluto: Astrology and the Rise and Fall of Planetary Influences 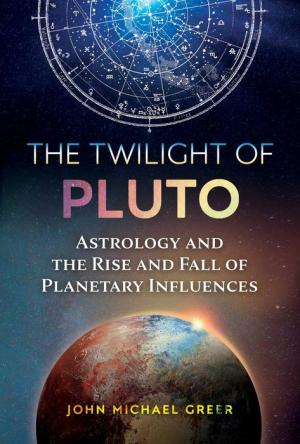 Occult scholar John Michael Greer presents an intriguing hypothesis: When the International Astronomical Union demoted the status of Pluto to a dwarf planet in 2006, this was the beginning of the waning influence of key societal features represented by this planet. Pluto, he posits, symbolizes that which opposes the cosmos, the beautiful order of the universe.

In this book, an eloquent and sweeping history of astrology, Greer shows that each discovery of a new planet has been preceded by about a 30-year period (a Saturn cycle) during which there’s the emergence of social phenomena that come to be associated with the planet. This was true even of two “phantom planets” that were thought to be out there, and whose influence faded about 30 years after they turned out to be non-existent.  Greer forecasts that since Pluto’s 2006 demotion to dwarf planet status, we are now in the twilight period of its influence.

He grounds his hypothesis by correlating what has happened with each major planetary discovery. In pre-history, the rise of civilizations was accompanied by discoveries that Mercury, Venus, Mars, Jupiter and Saturn are traveling planets and not just stars among millions. These discoveries coincided with developments in writing and trade, arts and crafts, animal husbandry and organized wars, priesthoods and permanent settlements, each phenomenon represented by the astrological significations of one of the planets, the foundations of astrology.

In modern times Uranus was discovered in 1781, coinciding with the American and French revolutions, symbolizing collective demands for individual freedoms.  Neptune, discovered in 1846, two years before the publication of the Communist Manifesto, heralded a flurry of utopian, egalitarian political movements.

Then came the discovery of Pluto in 1930.  It’s an odd case because while Uranus and Neptune are enduringly influential, astronomers were never unanimous about how to classify Pluto, tiny in size and with a weird orbit that makes it seem un-planetary. Pluto’s era, beginning at the turn of the 20th century, corresponded with phenomena like the splitting of the atom, the rise of psychoanalysis (the splitting of the psyche), the onset of two world wars, and the development of “modern art” which, Greer contends, is intentionally ugly and a deliberate affront by “elites” to the popular aesthetics of the masses.  Greer links Pluto not so much to the notions of empowerment and transformation favored by most modern astrologers, but to disorder and disharmony. Yet he concludes that Pluto’s influence during the 20th century was no mistake but, rather, “the nadir of the long cycle of human descent into matter that so many mystics and philosophers have discussed, not just for individuals or individual cultures, but for our species as a whole.”

If Greer’s hypothesis pans out, Pluto’s demotion in 2006 should mark the beginning of a shift in societies and human consciousness, away from the disruptive ugliness of the Plutonian era, and toward a greater embrace of cosmic beauty and order.

Greer predicts the shutting down of nuclear power plants – let’s hope so – as they’re not economically viable; a fading of Freudian psychoanalytic theory in favor of other forms of therapy (already happening) and a resurgence of certain forms of occultism (also happening). He does not address the centrality of Pluto in some of the most popular schools of astrology, particularly “evolutionary” astrology.  In 2022, it’s really hard to imagine most modern astrologers demoting Pluto any time soon. (A leading evolutionary astrologer recently drew 1,000 attendees to a Saturday morning webinar.)  Greer does see a continuing place for Pluto in astrology, though with less prominence and grouped with small bodies like Chiron and the asteroids, and he thinks that personality-centered astrology will decline somewhat in favor of more attention to mundane, or political, astrology.

Greer’s argument is worth reading and considering. It’s subtle. He notes, for instance, that even as German social theorist Max Weber was publishing his famous 1904 thesis (in the Protestant Ethic and the Spirit of Capitalism) that the hallmark of modernity is its disenchantment with the world – a move away from belief in magic and spirits -- there was a lively occult scene in Europe and elsewhere, i.e. the disenchantment was never complete.  Greer is not saying that before 1900, societies were harmonious and mystically attuned and that somehow, by 2036, we’ll all again be singing kumbaya.

Instead, he concludes that “making sense of the post-Plutonian future requires the letting go of the idea that the only possible futures are either continued progress or a sudden plunge into apocalyptic mass death.”  Both visions, he finds, are “utterly Plutonian.”  For Greer, a middle path between utopia and Armageddon is more in sync with the cosmos, with the way things really are.