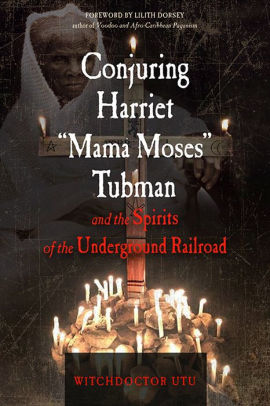 A quick Google search for the name Harriet Tubman brings up a host of links that describe her as an American icon, a proponent for women’s suffrage, and  a major figure both in African-American history.  It is understandable therefore that   first mistake a reader might make with a book entitled Conjuring Harriet “Mama Moses” Tubman and the Spirits of the Underground Railroad is to presume that only someone black can touch the subject.  The second mistake is that Harriet Tubman and the Underground Railroad (abbreviated as the U.G.R.R. in the author’s tradition) only consists of what has been known through formal historical records and acknowledged academic studies. The reality is that these two mistakes can keep a reader from  discovering a wonderful work written by a passionate and well-informed author.  Race and ethnicity should have no place if the author demonstrates, as this one does how, where, and why Harriet Tubman and the U.G.R.R matter to him as both in historical and magical terms.

Utu is an author who clearly knows that some readers may pick up  his book making one or both of these two mistakes;furthermore, he seeks to set the record straight as to why he is the perfect author for this book.  First, Utu dedicates the book to the Spirits of the Underground Railroad. It is clear from the dedication that he was instructed to bring this work to the public.  To build his case further, in the Acknowledgment section, Utu lists the various individuals and traditions that have shaped his more than 20 years of experience in working in a variety of traditions, but mostly with Harriet “Mama Moses” Tubman and the spirits of the Underground Railroad.  Baba “Teddy” Olujimi Jauw weaves into the Forward his friendship with Utu;moreover, he connects what Utu is attempting to do through a brief introduction to now-deceased teachers and elders and  his own role as a priest of both Yoruba Odu/Ifa and Gineh Yoruba.  Jauw reassures the reader that Utu’s work is “neither new, nor heretical” (xviii), while simultaneously giving a clear explanation as to why “elevation is for the living” (xix).  For those who consider that Utu is a usurper or someone violating tradition, Jauw promotes an image of the opposite: “[an] illumination that is not meant to deify anyone but to uplift them and their memory in our hearts and minds and diverse practices” (xix).

The core of the book is reflected in the Foreword where Jauw notes the elevation of “Mama Moses” was that she “crossed the river back again repeatedly to relentlessly rescue others” (xix). If the point of elevating Harriet “Mama Moses” Tubman is to emulate her, then this text is truly what Jauw challenges the reader to “cross the river, whether it is to freedom or back to free those still enslaved” (xxi).

Utu follows up these stirring words by Baba Jauw with an introduction that serves both those who know little about Harriet Tubman beyond her name as a historical footnote and more experienced practitioners. This is not a book for someone who is looking for a specific path complete with dogma and instruction, but it is a story and a working that weaves what is necessary in the mind, heart, and spirit of the reader and the recipient of this work.

While the book does not come with a trigger warning, any deep intense discussion of Harriet Tubman cannot avoid addressing the realities of slavery.  Utu demonstrates trustworthiness by not sticking to the well-known historical narratives that form the public knowledge of the U.G.R.R.. He chooses to address his whiteness and how it matters that he came to present this subject publicly after more than twenty years of serious work in this area. As an author, he is aware that academic circles see him as an “outlaw… a lowly witchdoctor - and a white one at that” (xxix). He does not shy away from the deeper meanings of the Underground Railroad as a resident of St. Catherines in Ontario. He has a natural attraction to and understanding from living in the area that brings authority to the text that allows the reader to be comfortable with following Utu’s lead into this awareness of  Harriet  “Mama Moses” Tubman and the Spirits of the Underground Railroad.  Utu reminds the reader that the end of the Underground Railroad, in the St. Catherines area, “[n]o white man could enter this area back in the day unless he was a “friend” or  known to the residents” (xxviii).  While Utu refers to this as a fact not openly known or addressed in historical texts covering the period, he wants to cement both his knowledge of and his desire for the subject matter. For the reader, Utu explains: “I share all this because for validity it matters where I live and how I came to hear he voices of the U.G.R.R. and see their shadows cast by holy light” (xxix). He concludes his introduction by acknowledging his primary supportive audience, “neopagans and witches of North America” and how this work is important as a first cumulative volume on the subject.

This book is thoroughly written to be  one savored over time with a variety of experiences as noted with each chapter.  For those who want to skip the backstory or who do not need to be convinced of the author’s bona fides, a reader can go to Chapter 1, “The Drinking Gourd and North Star Doorway”, where Utu details the mystery of the North Star beyond its traditional meaning as a navigation tool. The primary beauty of this first chapter resides in Utu’s instructions in the form of a reminder of its meaning, how to find it, how to work it as a mirror, and presentation of “The Lantern Bearer’s Prayer”as a start.

The second chapter, “The Conjuration of Harrie “Mama Moses” Tubman” delivers enough history for those with minimal factual knowledge of Tubman’s life or those who have the basic historical understanding of Tubman’s role in American  history. While this chapter presents an enhanced version of Tubman’s life with quotes from her throughout (pp. 9-22), Utu brings the reader through a transition from dry historical facts to a deeper meaning of Harriet Tubman as “Mama Moses”. From the discussion of the “Elevation of Mama Moses” (23) to  bringing the reader into basics of creating and consecrating an altar to Mama Moses, Utu provides a level of detail that is helpful without overwhelming the reader. The bits and pieces, such as working with the conjure symbol (Cairn and Cross), the role of Ras, the Freedom Seeker, additional prayers and workings with Mama Moses are woven into a natural pattern. As mentioned at the start of the book, this is not a reference book, but a journey. Each chapter follows such a pattern.

The third chapter, “Adding in Those Who Travel with Mama Moses: The Followers” covers the spirits who accompany Mama Moses. While Utu takes the time to describe other similar spirit families, the bulk of the chapter is given to a thorough discussion of the various types of spirits, divination tools (Bible, machete, anointing oil), working with different types of followers (diviners, healers) and practices (ritual baths). The level of detail makes this part of the journey accessible without being overwhelming for the reader.

In the fourth chapter, “The Lovers: The Bride and Groom”, Utu gives the story behind the spirits, Bride and Groom. Utu correlates the story with the reality for those who sought freedom in the past and includes a ritual, “Marriage of the Bride and Groom” which is required before approaching the couple about love issues. As in previous chapters, Utu presents sufficient detail for beginners and advanced practitioners.

In the fifth chapter, “High John the Conqueror: The Prince of Conjure”, Utu gives the history, feeding and empowerment of High John the Conqueror, Dixie John, and Chewin’ John. This chapter meets the needs of the reader who wants to know the differences in the three, how the three can be used together, and background on the three, including the Mojo Hand Hand of Freedom. Utu ends the chapter with an ingredient list for The Hand of the Wise Men that includes graveyard dirt. Utu reminds the non-African American readers that “while some of this work is intriguing to them, it is the literal blood , sweat, and tears of the African American you are working amid” (114).

In the  sixth chapter, “The Cairn and Cross: A Monument for the Spirits of the U.G.R.R.”, Utu blends his personal history of when he began to hear from the U.G. R.R spirits with a history of what commonly occurred during urban expansion of St. Catherines with the need move bodies to a new resting place; inevitably, some were not moved or left behind. The use of Cairn and Cross is a sacred act to honor those who do not have grave markers. Utu  provides details for creating and continuing the sacred work of  placing the Carin and Cross in various spots, indoors, and the role of the gatekeepers.

The pattern in the seventh chapter, “The Conjuration of “Captain” John Brown” allows the reader to focus just on the history, elevation, and working with Captain John Brown. As with earlier chapters, Utu details the tools of power, offerings, prayers, including the Armor of God and the Sword of Justice.  In a similar vein, albeit shorter, the ninth and tenth chapters “The Conjuration of “Mistress” Mary Ellen Pleasant”, “John W. Jones: The Sexton”, cover a historical introduction, elevation and working with the individual mentioned.  A pleasant pause with the same attention to detail falls even in the brief eighth chapter, “The Celestial Gate” which only covers two areas - work for the waxing and waning moon.

After covering some spirits of the U.G.R.R., Utu broadens the discussion with a lengthy chapter on “The Spiritualists”. Like earlier chapters, Utu presents a brief history for those who are not aware of the movement’s origins in a manner that does not overburden the reader. Keeping to a now familiar order through the chapter, Utu addresses how to work with Spiritualists of the U.G.R.R.,including tools of power, a service and seance with the Spiritualist court. Utu also details a specific baptismal working that permits the individual to take the walk to freedom, crossing the River Jordan, and divesting ourselves of our burdens. (212)  Unlike some other earlier workings, Utu encourages those wishing to complete this rite do so in a group for best results.

Utu concludes his book with two short, but effective chapters on “The Quilt Codes of Freedom” and “Spirituals as Conjurations”. In the twelfth chapter, Utu shares a few quilt codes, but readily admits that there are more codes which may be found in other books and materials.  Due a combination of oral tradition and the need to keep practices secret, much information has been lost. This is a part of the book that would benefit for expansion if possible with future editions. In “Spirituals as Conjurations”, I truly enjoyed the use of spirituals to assist in strengthening the connection through recitation, singing, or just speaking the words. There is a lightness and happiness in this chapter that provides a solid ending to the entire book.

Overall,this work provides a path with guidance for those who choose to accept the call to action that Baba Jauw proclaims in the book’s foreword. This is a carefully constructed experiential journey that is best savored over time in a variety of methods. Do not judge this book with preconceived notions. Instead, open, read, and enjoy.