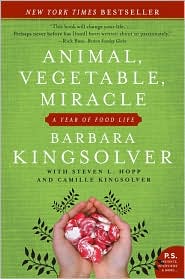 On occasion I find a book that isn’t particularly about pagan religious or related topics that I still feel adds value to concepts often explored in paganism. One of the biggest ones is food. While not all pagans are Wiccan, obviously, the harvest cycle of holidays that originated in Wicca has spread throughout many branches of paganism, and other traditions have created their own approaches to the cycles of life and death. Additionally, as animals, we all eat, and so pagan or not, this book has immediate relevance.

Barbara Kingsolver writes here about the first year she and her family decided to become locavores, eating food that only originated within an hour’s drive of their home. Having the distinct advantage of enough land and money to be able to have their own small farm made a huge difference, and the degree of her locavorism is beyond most people’s ability at this point (which she even admits). But it’s inspiring, and her story is illustrative of the differences between corporate farming, and traditional small farming, on numerous levels. Over the period of a year she not only describes what it was like to only be able to have certain produce fresh at specific times of the year, raising poultry, and how to keep a family of four fed this way. She also wove in a lot of information about just how destructive large-scale agribusiness is, from the human body to the animals and plants raised in it, and the environment as a whole. Also, the fact that the family saved several thousand dollars by being locavores is a huge revelation in this economy, and busts the myth that locavorism must be expensive because a whole chicken costs more than four dollars. Just for this practical information alone the book is worth the cover price and then some.

However, what I feel should be of particular notice is the way that the change in practices affected the family structure. Life began to revolve around the kitchen, and not in a bad way. All four members of the family were often involved in activities ranging from cooking to canning to slaughtering poultry; Kingsolver’s older daughter contributed a number of essays detailing her experiences growing up in this household (a good place to be, apparently) and the younger took the initiative to buy her own chickens and start her own egg-selling business. The family spent more time together because of the efforts put into making food happen, and this created stronger bonds as a cohesive group, with more communication and collaboration.

Additionally, and not at all surprisingly, Kingsolver and her family became much, much more aware of the cycles of the seasons, and just how important it is to pay attention to Nature, not just as an abstract entity, but as the environment we are all immersed in and reliant upon every day. Animals and plants taken out of their cycles suffer both as individuals and as species, and the safety of our food supply is threatened because of it. If we pagans are to walk the talk about harvest festivals and being close to Nature, then our food is a damned good starting point.

This is not the how-to book of locavorism, but it’s a good inspiration. Consider it locavorism in theory, with recommended reading for practice (though this book contains a wealth of recipes to try out!)

Five pawprints out of five.