Footprints in the Snow 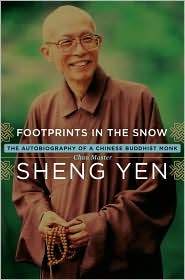 Footprints in the Snow is more than the simple retelling of Master Sheng Yen’s life: it has none of the boring self aggrandizing that most autobiographies contain.  Instead, Master Sheng Yen tells us simply, from the heart, how his life began in a small impoverished village huddled near the mighty Yangze River, to become one of the most influential masters (my words, not his) in the Chinese Chen Buddhist tradition.

Master Sheng tells us if he were sitting in the living room next to us, how he became a monk.  He tells us without being judgmental or victimized how his village was devastated by floods, poverty, little or no education, and perhaps the worst, invasions from first the Japanese and then Mao’s army.

Through the pages we see how he grows into young adulthood, going to Shanghai to reside at the great Wolf Mountain monastery.  During his stay as a novice, he discovers to his surprise that some of the monks were not as devout as they should be.  We learn about corruption, opium use and breaking of vows.  When Chairman Mao wins the war he orders all monasteries and nunneries to be disbanded. The monks and nuns are to renounce their vows, are forced to marry, and return to ordinary life.

Instead of following Mao’s orders, Sheng Yen flees mainland China to Taiwan, but in order to do this he must give up the robes of a monk and join the Nationalist (Taiwan) army, which he does with tremendous trepidation.  He is as we have guessed, miserable as a soldier.  But decades later, with the help of a general’s wife, he is finally allowed to return to monastic life.

Master Sheng Yen’s life was buffeted by the winds of Karma, yet he endured, persevered patiently, never forgetting his primary goal—to return to monastic life.  Despite the hardship and conflicting emotions he experienced as a soldier, he never gave up his Dharma practice. He continued to study, to meditate, and write articles, working with steadfast determination towards getting what he wanted most.

I loved this book, not only because of the Buddhist teachings found within (I practice Tibetan Buddhism and found some of what he said contradictory but that’s okay) but because of the stark beauty of the prose, the vivid scenes that he composed. I felt as if I were listening to the story told by an old and dear friend. Through the pages, I could see him wandering in the snow on a frozen New York night. I was with him when he returned to China and grieved over his parent’s graves.  His brother telling him quietly that they died thinking he was killed in the war.

You don’t have to be Buddhist to enjoy this book. It’s for anyone who is interested in reading a fantastic story, for those who are interested in history, philosophy and perseverance.  I found this book not only a great tale but an inspiration.  I think you will too.