Savage Breast: One Man's Search for the Goddess 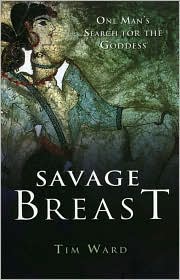 Savage Breast: One Man’s Search for the Goddess is so like many items that have been published and at the same time completely unlike any of them. For example, Tim Ward discovers the Goddess, one manifestation at a time. Each chapter is an exploration of a goddess, including Athena, Artemis, and Hera. Ward’s emotional experience of the goddesses does not compare to any I have read. His gender is only one factor.

It is “One Man’s Search for the Goddess”; thus, Ward does not promise to represent every man. However, his tone in many chapters indicates that he believes many men share his fears and angers for women’s power. Speaking for the pack, Ward writes, “Yet there remains a great divide between what men want and women want from love. What we males most often seek is not love itself…. Perhaps my case is extreme, and yet I believe that by and large we men do not want Aphrodite to get inside us” (p. 323).

I like Ward’s real interaction with myth, but I find many of his interpretations disturbing. That one person has specific fears of women I do not mind so much. That he might be right that these fears are widespread among men worries me. I appreciate Ward’s willingness to self-reflect. Even as a pro-feminist male, he has identified internal resistance to women’s power.

The concept of the anima is important to Ward’s psycho-mythical analysis of his experiences. Reflection on what the animus means to him and how it could fill out his theories could have benefited the project. Regardless of how his definition compares to others’, I found that Ward’s use of the anima demonstrates his connection with mythic imagery as spiritually symbolic of the human mind.

Sometimes Ward shares more from his personal life and fantasies than I really want to know. In some cases, his fears and anxieties are necessary for his points, but the intimate details are more than I needed for comprehension. Ready or not, be prepared to learn about Ward’s personal and sexual life.

Historically, Ward offers summaries of most theories on men’s and women’s history, including the ideas of Marija Gimbutas, Cynthia Eller, Jane Ellen Harrison, J.J. Bachofen, and those whom they influenced. I was familiar with most of these ideas, be they original or counter-arguments. Therefore, Ward does not create new historical theories, nor does he overemphasize one despite archaeological evidence. I find his historical arguments helpful in the book.

Although I admit my discomfort with hostile feelings towards women, Ward has at least opened me up to engaging with them. For example, without having read the book, I might block men who exhibit issues similar to Ward’s from my life. Ward’s openness about his feelings as a man towards women and his devotion to the Goddess have led me to believe that male hang-ups towards women are afflictions of our society that are worth working through. If someone like Ward, whom I have met in person and voiced my concerns to, can feel the anger he expresses, perhaps men with similar issues deserve a greater chance to explain themselves and for us to work through them spiritually.

In addition to responding to the Goddess as a man, Ward creates opportunities for women to channel the Goddess. Ward’s wife Teresa acted out many Goddess archetypes, even dual aspects of a single goddess. Women can use Savage Breast as a spiritual workbook by playing with the roles Ward describes for the Goddess. Although Ward struggles with the virtues of the goddesses, he acknowledges the absolute power of the archetypes and commends women who can become them. I have developed spiritually by considering the deviousness of the Goddess Ward depicts. I recommend this book especially for men interested in Goddess spirituality, their partners, and for women who want to better understand male psychology.