The Last Alchemist: Count Cagliostro, Master of Magic in the Age of Reason 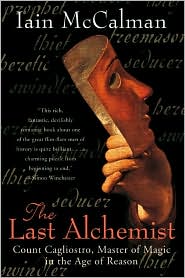 This is an excellent biography of Count Alessandro Cagliostro, master magician, mason, and mountebank, was born 2 June 1743 in Palermo, Sicily as Giuseppe Balsamo. McCalman begins the tale from Cagliostro’s youth. He spent his early childhood in a Moorish-Sicilian neighborhood in the dire poverty of an abandoned orphan. In an all too common pattern, young Balsamo got involved in a local gang and eventually was its leader. His well-to-do uncle Joseph Cagliostro had him educated and trained as a painter, and later he apprenticed as a chemist in a nearby monastery. It wasn’t long before he used his education to develop a talent in forgery.

He left Sicily to avoid prosecution, and became an apprentice with the Knights of Malta in 1765, working as a clerk for Cardinal Orsini. Even at this early stage, he was leading a double life, part clerk and part criminal. He married in 1768, and convinced his new bride to change her name from Lorenza to Seraphina. This was the first of many adjustments they made during their long married life, as Seraphina was part and parcel of the Cagliostro package.

It took Balsamo several years to develop his Count Cagliostro act, but it hinged primarily on his membership in the Freemasons, and his idea of developing a “true” Egyptian Masonic movement that would unite Christianity, Judaism, and Islam. In the process, Cagliostro made powerful enemies: Count Giovanni Casanova, Catherine the Great of Russia, Goethe, King Louis XVII and Queen Marie Antoinette, and Pope Pius VI.

Cagliostro was a crook, a swindler, and a rogue, it is true, but he was also a charismatic actor and showman. He performed free healings all over Europe and was loved by the poor. He and his wife moved from Italy to Spain, England, Austria, Latvia, and then to St. Petersburg. With an angry Czarina attacking him with her poison pen, Cagliostro quickly vacated Russia, moving on to Warsaw, Strasbourg, and Frankfurt, where he became a member of the Bavarian Illuminati.

Finally he and his wife settled in Paris, where in the summer of 1785 they started men’s and women’s lodges dedicated to his Masonic Egyptian Rites. Members of the upper class and aristocracy were drawn into his circle, providing a wide and well-heeled acquaintance from which he could bilk money. Unfortunately, an even bigger swindler than Cagliostro enmeshed him in the “The Affair of the Diamond Necklace,” a convoluted theft and blame-game that strained public tolerance for the French monarchs. Although Marie Antoinette was uninvolved she was tainted by the scandal, and the Necklace Incident was one of the catalytic events preceding the French Revolution.

Cagliostro was acquitted after a long trial, but his checkered past was finally catching up with him as written reports from all over Europe flooded into Paris. With his income dwindling and a bad reputation covering him like white on rice, Cagliostro and Seraphina fled back into Italy. Before long they were captured by the Italian Inquisitors. Both died in prison.

McCalman’s book is one of the few biographies on Cagliostro in English. The author documents his sources, and avoids excessive rumor-mongering about this outrageous individual. In the process of telling Cagliostro’s history, he also conveys the social and political environments of the times that allowed a person like Cagliostro to flourish in his skullduggery. Highly recommended book for people interested in individuals associated with the 18th century history of magic, Masonry and tarot.