Sex Sin and Zen: A Buddhist exploration of sex from celibacy to polyamory and everything in between 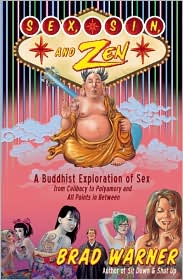 Buddhism, when it touches other countries and cultures, does not attempt to do away with the cultural aspects it meets. Instead, it assimilates into the culture, taking on that society’s ‘flavor.’  Tibetan Buddhism, for example is different from Zen Buddhism, as shown in the joke above. Yet, they are both Buddhist countries. When it comes to assimilation, Western Buddhism is no exception. The problem with Western Buddhism is that many aspects of Christianity, especially the Puritanical kind of Christianity, has found its way into Western Buddhist practice.  The problem with this integration, is that we as Westerners get a skewed perception of what Buddhism really is, and are often confused as to which tenets are actually Buddhist and which are not.  When sex gets thrown into the mix that confusion is intensified and we are left wondering just what are we allowed to screw, anyway?

Brad Warner does an excellent job of clarifying those misconceptions his latest offering, Sex Zen and Sin.

This is a fun book.  I enjoyed the double entendres, the innuendos, and the jokes. Warner left no issue unexplored, and wrote frankly about traditional and non traditional sexual practices. He also tackles big issues such as abortion.  He does this with humor, love, and with a healthy dose of practical Zen teachings.

When I asked my Lama about this, (I’m non sectarian Rime) he told me that Hartley’s justification of sex outside of marriage was foolish talk.  No matter how many times her husband says he’s okay with her having sex with other men, there’s no way to be sure that deep down he’s really not okay with it.  If it’s causing him suffering, then she’s entered the realm of sexual misconduct. You just can’t justify that away.

That said, I found the rest of the book informative, entertaining and engaging. There is a lot of good information in it regarding every aspect of a person’s sexual life. Everyone will come* away with something useful after reading this text. Warner does a great job showing us what Zen practice is and what it’s not, especially in the area of sexual relationships.  It’s not a replacement for the Kama Sutra, but it was certainly a fun read.

Please enjoy our other reviews of Brad Warner previous books: Zen Wrapped in Karma Dipped in Chocolate: A trip through death, sex, divorce and spiritual celebrity in search of the true dharma and Sit Down and Shut Up! Punk rock commentaries on Buddha, God, Turh, Sex and Death . . .

We also have several interviews and excerpts from Mr. Warner.