Celtic Wheel of the Year: Celtic and Christian Seasonal Prayers 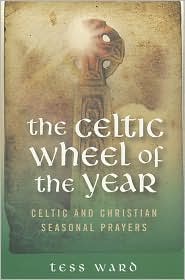 Tess Ward’s Celtic Wheel of the Year is a book of new and original prayers weaving the two strands of Celtic Christian and Pagan traditions into a single pattern of prayer. Divided into monthly sections with a daily pattern of prayer, it combines Christian and Pagan ‘holy days,’ drawing on Celtic themes of the presence of god in all life. Each chapter has a rich introduction to the weather and natural landscape of a typical month, as well as the themes and celebrations of that month. For example: In January we celebrate New Year, Epiphany, Twelfth Night; in February, Brigid, Imbolc, Candlemas, Valentine, Shrove Tuesday, Ash Wednesday; in March it is Lent, Spring Equinox, St David, St Patrick, Mothering Sunday and so on. Other celebration days include: Mountains and Hills, Rivers, Music, Colour, Wisdom, Crone, Pilgrimage, Dog Days, Sea, Trees, Silence. Also included are devotions for morning and night.

“It is the spiritual quality of the wheel rather than the historicity that is of relevance for this book. . . . The Celtic wheel might be attractive now for many reasons. The thought that it might connect to the past is immensely powerful. . . . The Welsh poet R.S. Thomas called matter the “scaffolding of the spirit.” The natural world is spiritually significant for most people and has the capacity to affect our inner life (pg. 4).”

The text is beautifully illustrated by Clare Arnison-Newgass.

The descriptions are earthy and very British, so much so that readers might not understand the sense of the descriptions if their climate is very different from that of the British Isles. The language connects strongly with women’s spirituality and feminist themes, which might put some readers off.

Although other writers, notably Caitlin Matthews, have written prayer books drawing from the Celtic Pagan-Christian well, I think Celtic Wheel of the Year is particularly wonderful. It is one of the most original liturgical books I have ever seen, and since the art of crafting creative liturgy is rare we need to cultivate more liturgists of this exquisite a caliber.

“The appeal of Celtic Christianity to present day Christians is not hard to fathom. Even Christians more orthodox and patient than myself are wanting to join up the lines much more between their daily lives, creation, their sexuality, their emotional lives, their faith. This inter connectedness between every living thing is of God (pg. 7).”

Ms. Ward is an Anglican priest who clearly understands the idea of clergy in service to the community and the sacred. Celtic Wheel of the Year is her gift to the combined community of the world. For many of us who are married or partnered with Christians, or are Christian and partnered with Pagans, this book is a beautiful addition to our library, for reference, use and inspiration.