The Kingdom Within and the Alchemy of Tarot 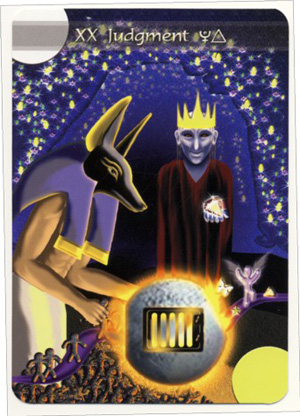 Lucina reached for the stars, figuratively and literally, in her book and deck set and full-color book; we definitely have lots to talk about here. To keep things clear, however, let’s start with the deck and book set first and then we’ll work our way toward her book,The Alchemy of Tarot.

The backs of the cards are definitely eye-catching and highlight two of the main themes Lucina has incorporated into this deck: Astrology and qabbalah. A large tree, representing the Tree of Life, occupies both long edges of each card surrounded by the planets of our solar system. The Trees’ trunks meet in the middle under a smiling sun so the card looks the same from either view. Overall, they are a little wider than most standard tarot decks and I found them a little bit hard to handle.

Turning the cards over, I was surprised at how much is crammed into this nearly standard 79-card deck. (Incidentally, the additional card, “Kingdom Within All”, is part of the major arcane and represents a combination of the spiritual energies of the World and the Fool.)  Much of the standard RWS imagery is present, but in many cases has been modernized. The Chariot shows a home with a minivan in the driveway next to a path flanked by one black and one white sphinx, for example, in a nice mix of past and present. 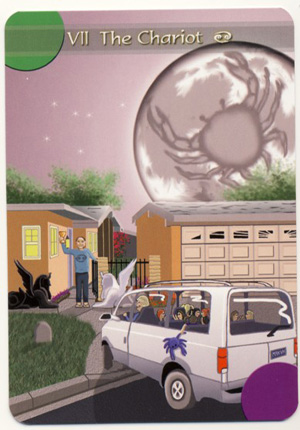 Astrological symbols are omnipresent; the Chariot’s moon has a large grey crab, one of the children in the minivan has a crab toy hanging out the window, and the man welcoming the arriving minivan sports a t-shirt with the astrological symbol for Cancer.

Card titles, astrological and elemental symbols are at the top center of each card with Roman numerals to the left of the title on the majors.  On the pips, the card title is present in the same position but also has a key concept flanked by the appropriate astrological glyphs on the line below the title. On the Seven of Cups, for example, the cups are towers on a sand castle on a beach. This image that reinforces the idea of “building castles in the air” that the card can represent in some cases, and the second line under the title reads “Poisonous Illusions”.  I could definitely relate to this image. 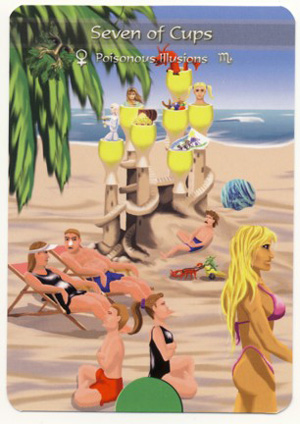 Like the pips, the Court cards had a printed title in the top center with a second row beneath, which in this case names the person or idea represented by the card. The Prince of Swords is “The Lord of Misrule”, which hearkens back to medieval festivals in which everything was turned “topsy turvy” and a commoner became “king for a day”. (Note: I need to stop thinking of Clotard the jester from Disney’s “The Hunchback of Notre Dame” and get that “Topsy Turvy” song out of my head!). At the bottom center is another printed line of archetypes that reads “Storyteller/Clown/Thinker”. 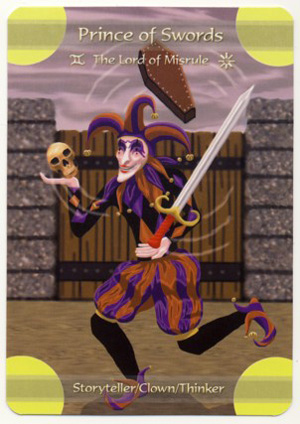 This deck welcomes all. You will find something about this deck to like, no matter what spiritual path you may walk. Jesus and Mary Magdalene, Gaia and the Green Man, Hecate and Dionysus, Father Time, and Mictlantecutli all make an appearance in the Court Cards. While much of the RWS imagery is retained in some fashion, there are symbols from many major spiritual paths and world pantheons throughout. Just a quick glance will show you symbols and people from Christianity, Buddhism, Wicca/Witchcraft, as well as Greek, Aztec, and Egyptian deities, mythical creatures, Arthurian legends and even a nod to a well-known series of Hollywood films involving pirates. (HINT: Look for Captain Jack Sparrow on The Hanged Man.)

As I prepared to write this article, I had difficulty summarizing the overall theme or idea that the designer and artist were attempting to convey. In the end, the overall theme I came up with was “eclectic”.  I think The Kingdom Within is trying to be all tarot decks to all people; consequently, it suffers from an identity crisis. Perhaps “dissociative deck disorder” may be a more accurate way of describing the situation. So much went into the images on this tarot deck, and I believe that is its greatest strength as well as its one major weakness.

The artwork had me a little puzzled, too. One minute I’m in Japan with the Empress, a geisha; later, I’m comfortably in my minivan in the Chariot. As I proceed on, I’m watching two naked people ride lions past the still-bleeding corpse of a gazelle (complete with exposed ribs) on Strength; and then finally I end up at The World sitting in a drum circle next to the Pyramids of Giza with people wearing hats to represent Bast, Anubis, and the major players of the Egyptian pantheon. WHEW. Between bouncing all over the world and then out to the planets of the solar system, I’m feeling a little overwhelmed by this deck. But I must admit that it’s not every day that you see a Christian priest and a Pagan priestess who are, according to the book, “angrily” fighting it out on a card (the Five of Wands), even though they are both thinking the same thoughts (above their heads).

Generally speaking, I’m not a fan of one key concept on a tarot card, simply because I believe it has the potential to limit the intuitive power of a novice reader. “Poisonous illusions” on the Seven of Cups is appropriate in some cases, but not all; this card isn’t necessarily negative but the words definitely give a negative overtone to a card that may not be. Some of these expressions are more apt than others—“Ruin” on the Ten of Swords is one I could certainly support, for example. On the other hand, the archetypes on the court cards were a fantastic addition.

The book that comes with the deck is very comprehensive and is an excellent resource. You will most definitely need it and it comes in very handy when you’re trying to remember who Persephone is, or the correspondences of the court cards with the Myers-Briggs personality types, which are also included.

The Alchemy of Tarot is a full-color book that showcases the cards and provides what appear to be the same card explanations as in the book that comes with the set. The benefit to Alchemy is not only to see the cards in color—the images in the book with the deck are black and white only—but to bring other elements, namely astrology and qabalah, into the mix when reading tarot.

For a beginning student this book might be a little overwhelming, so I’d recommend it to someone who isn’t a total novice. It would be especially useful to those who identify with astrology and/or qabalah.

Let’s look at the astrological tarot angle for a moment. Alchemy has great charts for reference on the different planets and signs represented by each card, as well as a zodiac wheel with the different decans (10 degree sections of the 360-degree circle) and the particular sign and planet that goes with each of the pip cards (excluding the Aces). As an astrologer I liked this a lot. For someone who is just learning astrology and its relationship to tarot, it’s a good resource, if only for the descriptions of the 12 houses and essential dignities.

What felt contrived to me, however, from an astrological point of view is not the correspondences for the majors or the pips, which follow the Golden Dawn’s system, but the associations for court cards. Alchemy breaks away from that system, but only for the court, which seemed a little bit odd.  So I think it might be a tough sell to someone who knows astrology well.

Like many other tarot books, there’s a chapter on spreads that lists many of the standards. But there is also quite a bit of history for background knowledge, including a section on the Egyptian pantheon and its relationship to the qabalah, which I found interesting.

I’m definitely a little surprised, however, that Alchemy boasts a $35 price tag, and I’m very sorry to say I don’t know that I could see myself shelling out that kind of money for a book—even in full color—unless I was truly enamored with the deck. A lot of the information is already in the book/deck set, which is $35 all on its own. Let me be clear, however: With the amount of information in the black and white book that comes with the deck, I’d happily buy it. So before investing in both the book/deck set AND Alchemy, buy the set and see if it’s enough for what you need.

If you’re looking for an eclectic deck to shake up your readings in the upcoming Gemini sun, you’re definitely in for a treat with Tarot: The Kingdom Within.