Queer Magic: LGBT+ Spirituality and Culture from Around the World 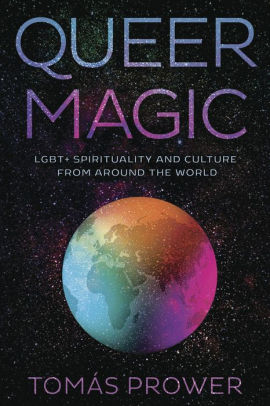 Each chapter provides numerous insights into the historical existence of queer people in religious texts or traditions such as deities who defy gender norms. The book is clearly well-researched but also does its best to include works from rural areas where 'traditional' ways of living are still maintained. In doing so, he provides an excellent resource for recognizing how history is written by those who erased the 'other' and attempted to make whole cultures normative.
“Colonization often forces native people to adopt the so-called ‘civilized’ ways of their colonizers both in behavior and belief . . .”

Prower uncovers the stories that have been whitewashed and sexually sanitized, giving queer peoples back the rich heritage they have long been denied.
“The more I learned about my queer tribe of “others” that was spread throughout the ages and the globe in so many religious traditions and spiritual beings, the more I realized how vast and diverse our tribe is. Lesbian, gay, bisexual, and transgender are just a handful of the flavors that there are under the umbrella of queerness that have existed in our history and religious traditions on every inch of land on the Earth. And therein was the inspiration for this book.”

A key takeaway from Queer Magic is that while they may be a minority, queer people can be found in every nation, culture, and religion. The author does an excellent job of maintaining a stance of queer empowerment and ends each section with 'special guests' -- queer people who speak about their own experiences in and with magick. These personal voices are heartfelt, honest, challenging, and triumphant.
"In that moment i knew that after all these years seeing so many different people in my church regardless of race, sexuality, or income, they were all there for the same reason. I am a bisexual Catholic woman of color... some people may judge me... God will love me unconditionally and I will do the same (~Leah Gonzalez)."

The prose is elegant and clear, the bibliography will provide the reader with a lifetime of places to explores and perspectives to engage.

Here is a list of other Queer or LGBT+ books to explore:
* Queer Magic: Power Beyond Boundaries, edited by Lee Harrington and Tai Phoenix Kulystin
* Arcane Perfection: An Anthology by Queer, Trans and Intersex Witches, edited by Cutlines Press and Dylan Ce
* Queer Paganism: A spirituality that embraces all identities, by J J Green
* Casting a Queer Circle: Non-binary Witchcraft, by Thista Minai
* Hermaphrodeities: The Transgender Spirituality Workbook, by Raven Kaldera
* Gay Witchcraft: Empowering the Tribe, by Christopher Penczak Author & Teacher
* The Path Of The Green Man: Gay Men, Wicca and Living a Magical Life, by Michael Thomas Ford
* The Fire in Moonlight: Stories from the Radical Faeries 1971 - 2010, by Mark Thompson
* Black Bull, Ancestors and Me: My Life as a Lesbian Sangoma, by Nkunzi Zandile Nkabinde
* Blessed Bi Spirit: Bisexual People of Faith, edited by Debra Kolodny
* Queer Spirits, by Will Roscoe
* Coming Out Spiritually: The Next Step, by Christian de la Huerta
* In Spirited: Affirming the Soul and Black Gay/Lesbian Identity, edited by G. Winston James and Lisa C. Moore