Faith and Magick in the Armed Forces: A Handbook for Pagans in the Military 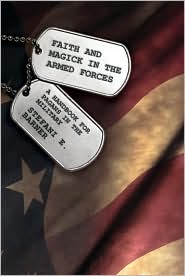 The term "military pagan" seems, to pagan ears, to be a contradiction in extremis.  "Harm None", especially for Wiccans, is the guiding tenet of the faith.  Stefani E. Barner's Faith and Magick in the Armed Forces: A Handbook for Pagans in the Military show's that it's possible, and even increasingly more common, to be both pagan and serve one's country in it’s martial arm.

In the pages of this book, one finds some details of the Military Code of Conduct in regards to spirituality and religion, alongside explanations of how that Code affects pagan worship.  It’s written from a civilian point of view, but a civilian whose life has been affected by the armed forces.  There are interviews with other very real people who have views of the military in different guises: the adult child of military veterans, the combat veteran, the wife, the widow, each told in his or her own words, with his or her own perspectives.

It discusses the pros and cons of military life in a very matter-of-fact way.  It talks about the challenges that pagans face, day in and day out, while serving their country, from starting a group on post, to celebrating the Sabbats, to finding a chaplain who is sympathetic and open-minded enough with whom discuss spiritual matters (as of the publication date, there were exactly zero pagan chaplains in and of the branches of the armed forces of the United States military).

I have pagan friends who were in the military, I have active duty friends who are pagan, and I have veteran family members who are pagan.  In reading this book and writing this review, I couldn’t help but ask their opinions.  I got differing views on the military and on spirituality, but mostly was the sentiment that it was/is hard to be pagan in the military, and I’ve no doubt about that.  This book shows that; however, it also shows that it’s not impossible and that, like anything else that’s difficult, it’s worth doing.

This book shows a side of life that I, and I’m sure many other pagans, won’t or can’t experience.   It touches on elements of life that civilians take for granted (in civilian life, there’s not the rigid hierarchy, no “don’t ask, don’t tell, don’t pursue”, not nearly the “toe the party line” attitude), and shows how practicing and living your faith (and not even necessarily paganism) in the military takes some work, and that there’s always help out there, whether it’s the Internet, people around you, a chaplain, or a good book.