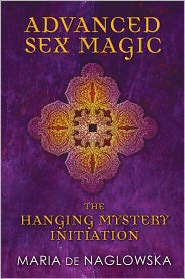 19th century Satanists did not have Anton LaVey. Instead, they had theosophists, eastern mystics, and Luciferianism, considered by its practitioners to be a Mystery innate to Christian esoteric symbolism. Practitioners of today might look upon the practices of the time and deem it kinky Christian occultism.

The author of the treatise Advanced Sex Magic, the obscure Maria de Naglowska, cast Satan as a resident in all souls rather than an external force. To read de Naglowska’s description, Satan stood for conformity, limitation, and social conventions people of her time considered “good.” To her mind and the minds of her order, understanding and integrating that force of negativity, doubt and human limitation was the first step in achieving union with God. While many of de Naglowska’s ideas have descendants in neopaganism and Jungian psychology, her initiation method of autoerotic asphyxiation has yet to take.

The practice itself does not appear until the 9th chapter of the book, and in truth, it is only one part of a greater magical system. de Naglowska does not deny the danger of the act, sharing one or two anecdotes of both men and women found dead after attempting to self-initiate via this method, minus the proper ritual acts and ritual spotters.

In Advanced Sex Magic, we see the roots of occult practice in effect today: the focus on Satan and the role of Judas Iscariot demonstrates symbolic roots of Wiccan and psychotherapeutic “shadow work.” While Wiccans draw from a different mythological core, often preferring ancient myths of polytheistic (usually Celtic) cultures to Christian symbolism, the intent and impact serves the same purpose.

Even so, the mysteries of de Naglowska’s time do mystify. Her acts of rebellion in the name of spiritual attainment, extreme to us living in the 21st century, were shocking to the point of unimaginable in her own time. The footnotes included by the editor help clarify the meaning of the heavily symbolic text and give cultural context where possible. Even so, to gather the full meaning of Advanced Sex Magic a reader must also look into de Naglowska’s other texts.

While much of the book is likely relevant to Luciferians, other readers may find this treatise a historic curio, good for a session of compare-and-contrast next to the likes of Eliphas Levi and Aleister Crowley. The printing of this book brings an obscured woman occultist into much-deserved recognition.

Recommended, but definitely not for everybody.