The Best of the Equinox, Volume III: Sex Magick 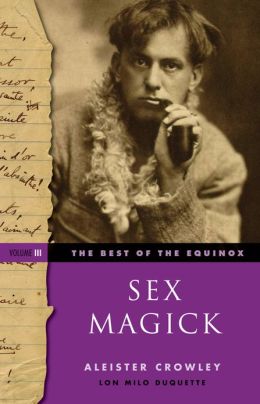 The third volume offers another topical collection of writings from Crowley's Equinox magazine. DuQuette introduces the collection with an explanation of how Crowley was introduced to sex magick and subsequently devoted a great deal of his magickal and literary efforts into this form of spiritual exploration and development. DuQuette also outlines the basic concepts of the practices and rituals included in the text.

The Gnostic Mass is the central ceremony of the O.T.O. It is a ritualized celebration of the order's “supreme secret of magick.” This beautiful liturgy is quite accessible and flows smoothly from section to section as it expresses Gnostic spiritual philosophies. A great deal of symbolic action takes place through the ceremonial activities of the Priest, Priestess, and other celebrants. A very specific kind of altar set-up is described. There are similarities to the Roman Catholic mass in the order of service.

The essay “Energized Enthusiasm” is a real treat, as Crowley discusses his ideas about the importance of sex as it applies to honing the magickal will. He mocks and derides the debasement of sex in religion and society. He regards the sex act as a sacrament, and explores the uses of sexual energy, especially in relation to the development of genius.

Following the essay is The Star Sapphire from “The Book of Lies”, a brief circle-casting ritual, and Liber A'Ash, a testamentary creed relating to the Creator of the Universe. Liber Cheth is a testament about the Holy Graal, aka Babalon, the Mother and bride of Chaos. The secret ritual of Apep, Liber Stellae Rubeae (the Ruby Star) focuses on awakening the human connection with the divine.

Liber Astarte (p 85) is an in-depth description of the required ritual implements and the practice of devotions, prayers, and meditations necessary to attain full union with the chosen deity. Part of this process includes approaching the favored deity with different kinds of love. Crowley offers sensible warnings about dangers along this path. This is one of the most useful and widely applicable sections of the book.

Liber Nu is a series of ritual procedures that centers on the Aspirant gaining identification with Nuit and Hadit. The goal of these solitary practices is the experience of cosmic ecstasy.  Liber H A D is a further series of ritual procedures and practices of meditation, intelligence, magick, and ethics in order to achieve Samadhi. Liber Nu and H A D are an unusual amalgamation of Gnostic, Thelemic, and Hermetic philosophies and deities.

Most of this material was written during the second decade of the twentieth century. Both England and the United States authorities exercised strenuous suppression and censorship of sexual material during that period. Anthony Comstock in New York, in coalition with several political and religious groups, led a stringent campaign against the publication and circulation of “obscenities” that lasted for several decades. The US Customs and US Postal Service were empowered to seize and burn objectionable material that was being shipped into the country, or circulated within it.

In order to publish and circulate this material in the Equinox magazine, Crowley, of necessity, was compelled to couch his thoughts in round-about ways with symbolic terms and metaphors that disguise the sexuality embodied in the rituals. Crowley had a liberal appreciation of the physical act of sex, but also found within it the means of personal transcendence. The magickal goal of this material is a ritualized performance of sex with the cosmos, with the goal of obtaining a spiritualized orgasm and ecstasy where the Aspirant's being is lost in an explosion of awareness, thus uniting with the source of life. As is common with Thelemic material, the development of personal Will is crucial to the achievement of this goal.

This is a fascinating collection of rituals, testaments and an essay that give the reader a good grasp of Crowley's thoughts on sex magick. This is not the Wiccan Great Rite of performing sex during a ceremony, or the Tantric practice of gathering esoteric energy through the sex act. It includes and transcends both of these practices. All kinds of magickal secrets are embedded (pun intended) within these writings, but obscured through allusions, metaphors, and symbolic words. It's the task of the reader to ponder and perhaps grasp all of these goodies.

This series becomes more fascinating as each volume is released. Highly recommended for serious students of the occult, ceremonial magicians, and practitioners of Thelema.