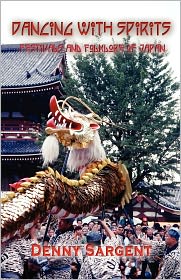 On the surface, visitors see a high-tech, modern culture, but wait until a festival day! Then the hidden Japan, linked to and preserving pagan traditions of unimaginable antiquity, is revealed. What now exists in Japan is a mind-bending blend of Shinto-animism, ancestor worship, and a regional variety of Buddhism. The Japanese say they aren’t religious, yet the islands are covered with Shinto shrines and Buddhist temples. There are prevalent beliefs in ghosts and the efficacy of magic. Japanese worship has evolved into a series of cultural traditions, not a religion per se. Locals sum it up as “born Shinto, die Buddhist.”

This little jewel of a book is a compilation of several articles on Japanese festivals, ordered more or less in chronological order through the year, with a few extra pieces tossed into the mix. The author shares descriptions of festival rituals, some national and others local. The festivals have a mix of charming and alarming qualities. People throw beans at demons on Setsubun in early February, set up a household altar of beautiful dolls for Hina Matsuri, Girl’s Day, in March, and hang banners featuring golden carp for Tano-no-Sekku, Boy’s Day, in May. The power of ghosts is a wide-spread belief, and these are honored in August at Obon.

The author shares details like special clothing, costumes, activities, and traditional foods specific to these festivals, along with Omamori – talisman charms – acquired for good luck, protection, fertility, or other desired properties. Goddesses and magical creatures are touched upon, as are special prosperity gods like Daigoku-Sama, who is a blend of an indigenous agricultural deity and the Hindu Ganesha.

The book is dotted with black and white photographs taken by the author’s wife Rebecca. It isn’t an exhaustive, scholarly study but more of an observer’s report of things seen. Sargent includes some additional notes from inquires made into the roots of traditions and the legends associated with them. Even the Japanese aren’t entirely certain of all the details, but carry on regardless.

This is a short, quick read and a wonderful book to get (or give as a gift) before traveling to Japan. Cities with particularly flamboyant festivals are mentioned, as are notable shrines and temples associated with the festivals. The casual approach makes the topic accessible and fun. Some repetitious details and explanations give evidence that the book is a compilation. This could have been edited out but doesn’t mar the content. Indeed, the extra translations of unfamiliar Japanese terms are helpful.

While the Japanese have become an economic giant in the global community and have exported gadgets, cars, comics, cuisine and other commodities, little trace of their indigenous blend of Shinto and Buddhism ripples on the surface of their trade. Be assured, this book will reveal how these beliefs and practices are at the bedrock of the culture.