Rituals of the Light Within: A Compendium of Writings from the Magical Work of Elizabeth Anderton Fox 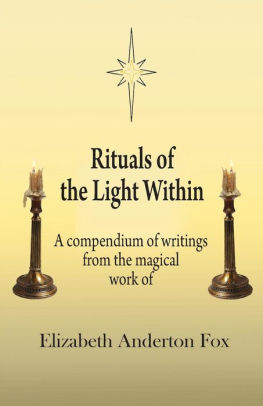 When reading esoteric texts, modern readers always face a conundrum: take every reading as a product of its time and seek its core spiritual values, or criticize once commonly accepted ideas packed with gender essentialism, xenophobia, and outright racism to the point of negating the overall value of the overarching work? In the case of this collection of theatrical esoteric works, Rituals to the Light Within, this very dilemma appears in the very first ritual.

The Circle of Unity Ritual, a ritual theater piece meant to celebrate the greater mysteries of life, the universe and time itself, has among its cast Man and Woman.

In the introduction of the Man, he says, "I am Man of the Family of Humanity. I am the son of Earth, I mould and fashion it according to my will. Mine are the towns and cities, the temples and places and the great and humble homes of people…" His wordy passage goes on for another three paragraphs. "I am a child of Earth and lift up my eyes to the heavens and am the observer of the universe…" When Woman finally speaks, she says "I am Woman of the family of humanity. I am the daughter of Earth. I am the companion and the mate of Man…" and in her following very brief speech, it only gets worse.  "Mine is the voice of the peacemaker and I calm the aggression of the heart of Man."

Given these two speeches, it's extremely difficult to not say "Oh F--- you" and throw out the entire book. This vision of two genders, one where women serve and nurture and rear children (a contribution not expected of men, clearly) while men get to have the actual fun is so insulting as to be aspiritual. This is an unspoken Western Mystery: why do certain Western occultists persist in clinging to these false polarities of orientation and gender?

Fits of pique at esoteric patriarchy aside, Elizabeth Anderton Fox has assembled an otherwise excellent collection of ritual theater pieces. Some of them look well worth exploring, especially for anyone wishing to deepen innate understanding of tarot, astrology, and sacred geometry. Written over the course of twenty years, these rituals are intended for exercise and witness.

The works are weighted heavily with western symbolism and done so for the education of the ritual participants and witnesses. While perhaps not a system of self-initiation or group creation, Rituals to the Light Within certainly serves as a means of deepening western esoteric education. To that end, any reader may need to consider the importance of tradition and symbolism, especially when the symbolism conflicts with the realities of the exoteric world.