Precessional Time and the Evolution of Consciousness: How Stories Create the World 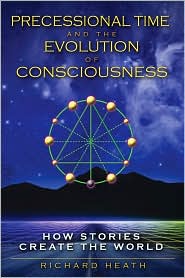 The Precession of the Equinoxes is the great cycle of time measured by Aeons or World Ages. We are currently amidst the shift from the Age of Pisces to the Age of Aquarius, so it isn’t surprising to see new texts on this topic. The author’s approach is a scholarly, non-hysterical examination of the impact of the changing of the ages. This has nothing to do with end-of-the-world scenarios or Armageddon-type tragedies relating to the Mayan Long Count. Those seeking titillating conjectures on the purported December 2012 destruction should look elsewhere.

Different authors have tackled this topic from various viewpoints and biases, including Santillana and Von Deschend, Gurdjieff, Alexander Thom, and Ernest McClain. Since this is a massive topic that extends far beyond written history and involves an esoteric understanding of the cosmos, each author makes a deposit at the wisdom-bank.

Heath, who is also the author of The Matrix of Creation, begins this new book by exploring the structure and symbolism of ancient cosmological stories. He proceeds with an excellent examination of the Megalithic monuments that measure solar and lunar cycles. The numeric interrelationships between the Metonic and Saros lunar cycles and Jupiter-Saturn cycles are compared. Musical ratios, commonly known as the Harmony of the Spheres, are discussed in relation to astronomical ratios.

Chapter 4: “Crisis of the Mind Machine in Pisces” tackles the problems that technology presents to our current civilization at the dawn of a new age. Chapters 5 through 7 entwine the precessional theories of Gurdjieff with harmonic ratio relationships of the moon, solar system and galaxy.

While I greatly admire Heath’s top-notch explanations of Megalithic astronomy and harmonic ratios, the author fails to provide a chronology of the Ages he uses as a basis for the timing of his historical material. There are various calculations for determining the beginnings and endings of World Ages, some more respectable than others. Gurdjieff’s theories seem to hijack the second half of the book and the text gets bogged down with his weird terminology. While Gurdjieff’s ideas are valuable, there are other sources that could have been used as supplemental supports for the mathematical models.

Toward the end of the book, some really wild ideas are thrown at the reader like random spit-wads and not fully explored. The author is so blissed-out with his intricate theories that he fails to provide much in the way of specific examples to demonstrate his abstract processes. The mechanical process of the combustion engine just wasn’t sufficient, and it’s an ironic choice considering Heath’s wary stance on our machine- and gizmo-laden culture. The material begs for more in-depth treatment with more careful pacing, and it probably should have been worked out in two books rather than one.

The author also indulges in conjectures about the future based on his hypotheses about precession. I can hardly criticize him for yielding to temptation in that respect. Heath’s material quickly detaches from the ancient cosmology and doesn’t integrate much astrological lore, either. While not an overriding necessity, these are in fact the human creative dimensions that could have added a great deal more charm to the technical analyses.

Readers will benefit from a good grasp of math and astronomy, or an in-depth knowledge of constellational astrology and galactic structure. Heath supports the theory that the shifting ages have an influence on the development of human civilization, but he is careful to describe this as “an enabling causation rather than a determining one of material causes and effects.” Heath undercuts notions of linear time and determinism, and the limitations of empirical proof through repeated experiments, both highly annoying shibboleths of modern rationalism. It was fun to see them get kicked to the curb.

I recommended this book for those who have done some prior reading on the subject and are seeking more puzzle pieces in the quest to gain understanding of the full implications of the Precession of the Ages.