The History of Tarot Art: Demystifying the Art & Arcana Deck by Deck 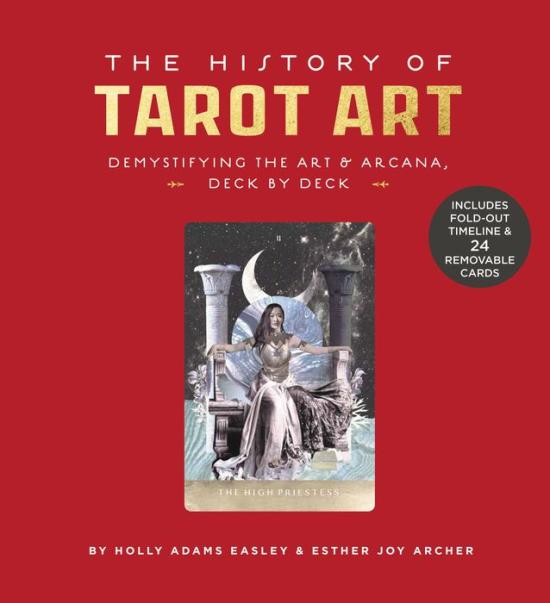 The authors of The History of Tarot Art, Holly Adams Easley and Esther Joy Archer, are among the ever-growing number of entrepreneurs capitalizing on the twenty-first-century mainstreaming of Tarot. The two friends have a website where their followers can find their "Wildly Tarot Podcast," make donations to the podcast or support it on Patreon, ask questions, shop for their Wildly Tarot Deck and Wildly Lenormand Deck, and purchase Wildly Tarot podcast merchandise: phone cases, stickers, t-shirts, posters, pillows, pins, mugs, and so forth. They also have a link to their publisher Quarto Knows for those wanting to pre-order The History of Tarot Art.

Quarto has been interested in Tarot for a few years now, publishing, among others, several how-to books on the subject by Liz Dean through their Fair Winds Press, an imprint founded in 2001 and dedicated to health-oriented life-styles, including diet, fitness, parenting, and spirituality. More history-based studies, including Sarah Bartlett's Iconic Tarot Decks (2021) and S. Elizabeth's The Art of the Occult: A Visual Sourcebook for the Modern Mystic (2020), came out through the Frances Lincoln imprint, which was founded in 1977 as a home for informative books on everything from gardening to British history to art and culture. Easley and Archer's The History of Tarot Art, however, has entered Quarto's elite insofar as it is listed with the Seattle-based Epic Ink imprint, which "publishes a select handful of deluxe, topical, highly coveted books in unique, customized formats showcasing the hottest properties in Movies, Music, T.V., Comics and Pop Culture" (Quarto website).

As an Epic Ink publication, The History of Tarot Art rated a beautiful and very sturdy cover, an equally sturdy red-hot book sleeve, a fold-out time-line, two dozen Sola Busca cards in pockets attached to the back cover, and pages and pages of color reproductions. As the table of contents makes clear, the authors narrowed the art history of Tarot down to a dozen decks, each addressed in its own chapter ending with a few additional "you might also like" possibilities. Few are likely to argue with the importance of the first five: the Visconti-Sforza, Sola Busca, Marseille, Rider-Waite-Smith, and Thoth. After that, much is open to debate and indeed, perhaps the authors mistook current fame for historical relevance: it is hard to see what is most important in the art of one's own time. The last chapter is more wide-ranging as it includes samples of different deck types: fine art, mixed media, pop culture and tv-inspired, historically reverential, and human experiences, again with "you might also like" extras attached. Finally, the epilogue includes the fold out time-line and charts of meanings for Marseille-style, Rider-Waite-Smith, and Thoth cards. A three-page appendix provides a quickie lesson on how to read the cards.

A one-page list of "resources for further reading" substitutes for notes and a bibliography. This list includes a couple of worthwhile suggestions, but is otherwise composed of the guidebooks for the main decks featured in the chapters. The authors note the importance of the "Wayback Machine" to their work at the bottom of this page and in the opening pages, claiming that many of the stories told about these decks would be lost had they not taken the trouble to dig them out of the digital ether and set them down in hard print. It may well be that the authors used the Wayback Machine extensively, but there was little in this book that I wasn't already familiar with and little if anything that can't be found in print. The authors would certainly have been better off using such sources, particularly in their introduction and discussion of the Visconti-Sforza deck.

For readers interested in a more thorough, if less colorful, survey of Tarot art with some well-sourced history, Stuart Kaplan's Encyclopedia of Tarot is still the best value for your money and has lots of information on the older decks, including the Visconti-Sforza, Sola Busca, and the Rider-Waite-Smith. Rachel Pollack's The New Tarot: Modern Variations of Ancient Images (1990) is an excellent source for new decks through the 1980s and while Sarah Bartlett's Iconic Tarot Decks: The History, Symbolism and Design of over 50 Decks (2021) landed at Francis Lincoln instead of Epic Ink, it offers a much larger range of Tarot decks for visual survey purposes. In addition, Tarot, Volume I from Taschen's Library of Esoterica, edited and written by Jessica Hundley with essays by Penny Slinger, Johannes Fiebig, and Marcella Kroll (2020) is worth a look, just for the range of Tarot images represented, if not necessarily for in-depth analysis. Still to come this year is Laetitia Barbier's Tarot and Divination Cards: A Visual Archive (2021) through Cernunnos/Abrams.

In spite of the annoyance books lacking research sources and citations inspires in me, I had fun unboxing and leafing through the illustrations in The Art History of Tarot, particularly the pairings of posters with the Aquarian Tarot and New Palladini cards and of famous popstars with those from the Morgan-Greer and Cosmic Tarot. I enjoyed a lot of the decks in the "you might also like" pages, although I failed to see the connection to the primary Tarot to which most were attached. Perhaps there was a certain amount of shoe-horning of decks the authors felt deserved mention into whatever spaces were available?

The History of Tarot Art has been timed for release to Christmas shoppers. If you know someone with a nascent interest in Tarot and art who isn't looking for quality research sources and has a high tolerance for casual writing, then you might want to put it on your gift-giving list. Historians might want to pick it up just because it is so gorgeous and, like the other titles I mentioned above, likely to become a timeline marker in its own right, simply for the effort made to identify and chronicle the Ur-decks of our era. Indeed, 2020-2021 is sure to be seen as another one of those turning points on Tarot timelines for the sheer number of book-length publications released on the subject of the art history of Tarot.