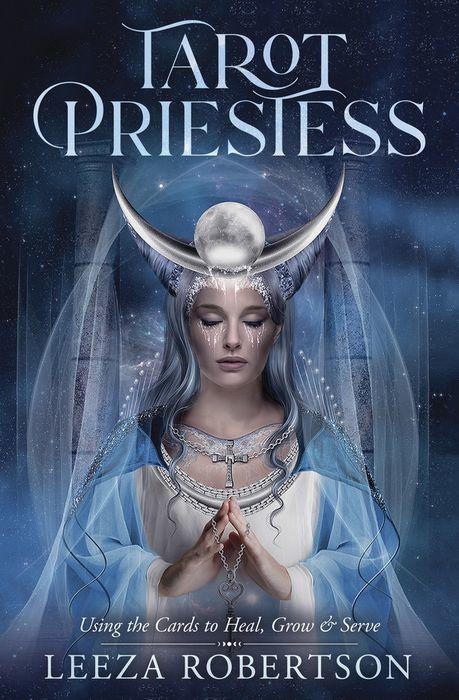 Leeza Robertson’s Tarot Priestess: Using the Cards to Heal, Grow, & Serve is one of those intriguing books that is much needed for those who seek a deeper dive into the use of tarot for spiritual purposes. The cover sets the tone with an image of a traditional High Priestess tarot card with lunar headdress. This echoes the very comprehensive guide to seeing the tarot through different eyes.  Robertson’s introduction quickly confirms the primary audience as being “all who identify as womxn and all those who seek out feminine spiritual practices”; furthermore, she notes that the call to “serve at the feet of the goddess again- the priestess”. (pg. 2)  While there are many surprises in this book, the biggest starts with the underlying premise that Robertson does not shy away from: using the workings and content found in Tarot Priestess: Using the Cards to Heal, Grow, & Serve to effect a return for womxn in general to take back power that has been lost or given away. This work is an offering which permits others to recommit to a full and strong relationship with the goddess.

This new take on exploring the tarot provides the start of Robertson’s teachings as a specific inclusive tarot path. The book weaves through three gateways which explore seven major arcana cards each, followed by four temples for each of the suits.  Through a clockwise exploration of the temples, a different goddess who represents the quality of the suit and element reigns:  Earth (Danu), Air (Saraswati), Fire  (Lilith), and Water (Priestesses of Avalon). Robertson covers the court cards as the stages of the priestess or initiation

What I liked about this text is the straightforward layout with the understanding that readers will work from start to finish in order, rather than skipping around by chapter. A journal is a good companion to utilize with this work as Robertson emphasizes the three keys for this path as being “purpose, discipline, and organization” (pg. 8) The chapter on the role of the Fool inspires as a start on the journey including the attire and tools to carry in one individual’s Fool’s knapsack. The devotional exercise separating the powerful introduction and Part One works well to draw the reader into the overall experience.

What works well in Part One in the first Gateway are the many opportunities for the reader learn the basics of the tarot priestess path including the difference between ritual and ceremony.  Robertson achieves this first having the reader work with the text through a variety of exercises, conversations with the individual major arcana cards (Magician, High Priestess, Empress, Emperor,  Hierophant, Lovers, and Chariot), and  corresponding devotional exercises. I loved the connection between the overall focus of movement, represented by the Chariot and the natural transition to the next seven cards.

In the second gateway with major arcana cards Strength through Temperance, the work shifts from the internal to the external. In a similar vein to the first gateway, dialogue continues with the individual arcana cards and there are excellent devotional exercises that draw the reader/participant deeper into the path of the tarot through a series first tests. The most moving part of this chapter falls in the use of the labyrinth with Death and Temperance with the understanding  the labyrinth as path and exercise does not end until the conclusion of the third gateway.

The final gateway covers the Devil to the World, and by Robertson’s acknowledgement, this row represents a “dark night of the soul” (pg. 59) due to the difficulties that come with this part of the path. The Devil and Tower devotional exercise spread is powerful as it addresses change present and what may come. The second devotional exercise through Star, Moon, and Sun provides revelation and respite before covering the final aspects of the initial journey with Judgement and the World with a final devotional exercise that acknowledges changes wrought within.

As Part One uses just the major arcana, Part Two uses the court cards. Robertson gives an excellent commentary on how the sixteen court cards are ways to embody the priestess path as opposed to the traditional bias about devotional work that narrows the manner in which a priestess can and should appear.

Chapter Four covers the use of the sixteen court cards as paths turn this book from a straightforward manual into an even deeper pathworking suitable to a variety of readers. Each of the sixteen court cards has a role within a particular temple and within the journey the participant takes in working through this book. Robertson weaves clear descriptions and their placements for the Neophytes (Page), Acolytes (Knight), Priestesses (Queen), and High Priestesses (King) within their respective temples.  Once a particular card is chosen, there are several options including the use of bibliomancy as a secondary tool, and possibly the use of major arcana to enhance the overall experience for the reader.

The picking of a court card assists with the initial tour of the temples. These are presented in a clockwise order beginning with in the north (Earth-Pentacles) and concluding with the west (Water-Cups). Each temple covers the minor arcana cards ace to the ten of a particular suit. In working this section, I agree with Robertson that having at least a second deck is helpful as one will be used for spreads, while the initial deck would have just the suit being used for the temple. Excellent advice on setting up individual altars in the first part comes into play with each of the sub-chapters in Part Five when the advice to set up an altar to the individual temple goddess comes into play.

What makes this part of the book so valuable is the acknowledgement of how to journey through these temples and the individual devotional exercises and conversations with the goddess and the cards. The goddess altar as anchor helps to cement further the three items - purpose, discipline, and organization that Robertson notes in the introduction as being critical for this overall journey. Temple work includes daily practice and rites.

Lilith, as goddess, presides over the Temple of Wands (Fire) where participants engage with and learn the lessons of lighting one’s inner fire. The fire of creation flourishes with Lilith and in this temple where courage is required and nourished in equal parts.  I found the aspects of laying down the past, in particular with exercises surrounding the Ten of Wands to be enlightening and most powerful.

The final Temple of Cups (Water) with the Priestesses of Avalon covers the arena of emotions and thriving instead of just surviving. The flourishing of the heart and the devotions for each card provide inner strength as the journey through the temples concludes.  As with each of the other temples, the reader as participant is urged to return at any time for more workings with a particular temple and goddess.

Robertson presents a work that fits the needs of the beginner and the advanced tarot practitioner by presenting a new path to the workings of a tarot priestess. For those who consider themselves to just be dabbling in or using the tarot simply for divination purposes, Robertson has laid out a reasonable argument to consider using one’s dealings with the tarot as a means of connecting and doing work for and with the goddess. This inclusive work is for all who embrace the feminine spiritual practices regardless of gender orientation.  The author’s final comments on using the work however necessary to keep the door to the goddess open resonated with me. It is understandable therefore that a book entitled Tarot Priestess: Using the Cards to Heal, Grow, & Serve is a serious attempt to address a clear need for those who seek new ways to understand how to work with the goddess or how to strengthen their connection and power overall.

Tarot Priestess: Using the Cards to Heal, Grow, & Serve presents as both a journey and reference book for the novice or advanced practitioner. Although I looked forward to the Temple chapters (Five, Six, Seven, and Eight), I felt that Chapter Eight (Temple of Cups) could have been extended slightly as it rounds out the end of this part of the journey before the conclusion.  This chapter’s flaw is minor in a much needed refreshing addition to books on divination, and the use of tarot specifically.

For those seeking a strong introductory foundation, Tarot Priestess: Using the Cards to Heal, Grow, & Serve provides a path with guidance and flexibility. This book would fit as supplementary reading for any path or tradition that uses tarot as a divination tool.  The use of varied goddesses with the ability to add more as needed makes this a strong addition to any bookshelf or e-reader. Finally, this book provides a delightful view into the world of tarot in a manner not often explored.  While tarot is often used to forecast the future, this practical book demonstrates its usefulness as a path for healing of the self, growing in awareness, and providing service for others. It is a much needed work.