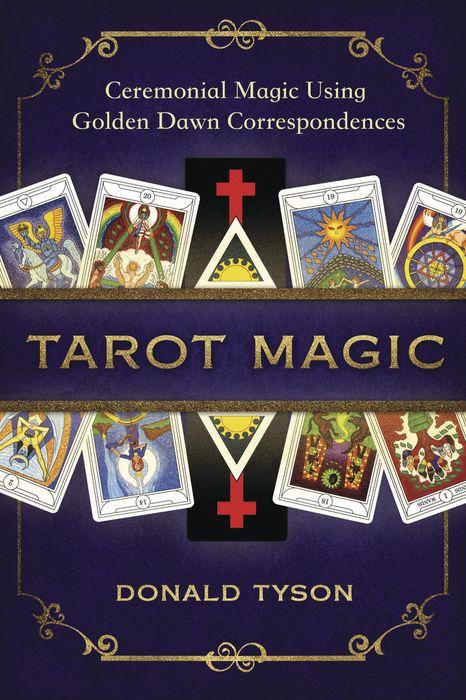 Donald Tyson is a well-established author and practitioner of the Golden Dawn tradition of Western esotericism and magic. His Tarot Magic was first published by Llewellyn as Portable Magic in 2006 and re-released under the new title in 2018. Llewellyn, as readers of this website undoubtedly already know, supports many authors and books that restate, explain, and occasionally expand on Golden Dawn materials. Tarot Magic is one of the expansive titles that, intentionally or not, provides one corrective to the modern tendency to mistake Golden Dawn rituals for the main purpose of the Order. Israel Regardie wrote about this problem with reference to The Original Account of the Teachings, Rites and Ceremonies of the Hermetic Order of the Golden Dawn (Stella Matutina) (1971; Llewellyn 6th edition 1993).

"I [Regardie] had labored under the delusion that the rituals themselves indicated without equivocation that there was far more to the system than the rituals themselves, and also because the remainder of the volume itself elaborated a whole system of magical practice which could exist altogether independently of the initiatory rituals." (Israel Regardie, foreword by David Cherubim, "Self Initiation by V.H. Frater A.M.A.G." [AKA Israel Regardie], in The Complete Golden Dawn System of Magic (1984; fourth edition, paperback, Las Vegas, Nevada, USA: New Falcon Publications, 2013).)

Thus, Tyson's objective is not to exhaust the reader with more about the dusty practices of long dead ceremonialists, but rather to show how Tarot may be used to perform solitary Golden-Dawn-based magic garbed in a t-shirt and blue jeans in one's kitchen or living room. This more protestant than catholic aesthetic does not, however, obviate the need for preparatory grounding in basic concepts of magic and Tarot and that is where Tyson starts. He defines Tarot magic in chapter one, provides a brief summary of the history of Tarot in chapter two, describes the structure of the modern Tarot deck in chapter three, and explains specifically how the deck was redesigned and card correspondences developed by members of the Golden Dawn in chapter four. In chapter five, he describes and discusses the trump correspondences as understood with reference to Westcott's translation of the Sepher Yetzirah: readers who might have wondered just how the Tarot trumps came to be associated with the planets and signs of the zodiac will be glad of the clarity offered on that point alone. In chapter six, he addresses the trump correspondences with the elements and cosmology. In chapters seven, eight, and nine, he explains the correspondences of the pips and court cards most relevant to magical practice and how the court cards may serve as significators with reference to the zodiac and decans. This latter material may possibly be more familiar to Tarot readers who use or have made a study of the Thoth Tarot and Crowley's writings about it. In chapter ten, the ten sephiroth are added to the palimpsest of Tarot correspondences.

Tyson then describes and explains how to use Tarot to practice magic. In chapter eleven he introduces the "Symbolic Tools of Tarot Magic": the point, ray, circle, triangle, and cross, and then details each one with specific reference to their role in chapters twelve through sixteen. Chapter seventeen proposes one way to perform a conventional ritual with Tarot cards, with more specific ritual types detailed in chapters twenty-two, twenty-three, and twenty-four. Chapters eighteen, nineteen, twenty, and twenty-one offer guidance to the selection of cards for the purposes of a given working. Chapters twenty-five and twenty-six are about making Tarot talismans and evoking elementals respectively. The book ends with an appendix on "Modified Tarot Correspondences" (these are Tyson's modifications), a glossary, a list of works cited, and an index.

Tyson's writing is clear, concise, and always, always to the point. There are no extra words in this book. All of the chapters are short and focused on exactly what the title says they are about. A few include useful diagrams and lists. Those already familiar with Golden Dawn and/or Tarot practices might skim the first third—which is obviously intended to help orient beginners—but will most certainly read what follows with more care. Tyson does not provide notes, but he consistently cites the particular author whose work he has studied and occasionally comments on this or that author's discussion or point of tradition that he differs with or has altered for his own purposes. As he states several times, however, the Tarot magic he proposes is entirely based on the Golden Dawn system; his personal alterations to that system are asides or are placed in the appendix. Tarot Magic was written, first and foremost, as an educational text meant to be read and read carefully. There are few books on Tarot practices that are as well prepared, well-informed, and interesting as this one, or with as many potential applications. Highly recommended for everyone who uses Tarot cards.